Brick is a reservoir cladding, meaning that it absorbs and stores water (rain) when it becomes wet. In some homes, with brick veneer cladding systems, mold contamination has occurred within exterior wall cavities. In some homes, wood decay at bottom plates has also occurred. What is the nature of the problem?

In some homes located in cold and mixed climates, with brick veneer cladding systems, mold contamination has occurred within exterior wall cavities. In some homes, decay at bottom plates has also occurred.

Why has this problem occurred?

Mold and wood decay require moisture. So in the simplest sense this is a moisture problem. Sufficient moisture has accumulated within the exterior wall cavities of some homes to lead to mold growth and wood decay. The source for the moisture is rain.

Rainwater is absorbed into the brick veneer after a rainstorm. Water vapor is then transported from the rain-wetted brick veneer through the exterior sheathing into the exterior wall cavities by a process called vapor diffusion. This water vapor condenses on the cavity side of the interior polyethylene vapor barrier. When sufficient moisture condenses on the surface of the polyethylene vapor barrier, it runs down the surface of the polyethylene under the action of gravity where it accumulates on the bottom plate of the wall. If sufficient water accumulates at the bottom plate, mold growth will occur ultimately followed by wood decay.

Why does this problem occur with brick and not with vinyl siding?

The key difference between brick and vinyl is that brick is a moisture reservoir and vinyl is not. Brick absorbs rainwater and holds it within its internal pore structure. Vinyl siding is not porous and does not absorb rainwater. When a moisture reservoir is located on the exterior of a wall assembly it can act as a source of water that can migrate by a process called vapor diffusion. Water vapor will move by vapor diffusion from a high concentration of water vapor to a lower concentration of water vapor. It will also move from a warm surface to a cold surface.

Think of a brick veneer wall as moisture "capacitor" that is "charged" with moisture during a rainstorm that subsequently "discharges" in the direction of a temperature gradient and concentration gradient. Moisture flow by vapor diffusion occurs from warm to cold and from more to less. When the wall cavity is colder than the brick, and drier than the brick, water vapor will migrate into the cavity by the process of vapor diffusion. This condition only happens during the summer after a rainstorm.

Yes. The colder the interior of the house in the summertime, the more moisture is drawn inwards out of the brick veneer into the wall cavity. Recall that moisture flow by vapor diffusion is from warm to cold. Air conditioning cools the interior of the exterior walls relative to the exterior brick veneer. The lower the thermostat setting, the more moisture is drawing inwards by vapor diffusion.

It is not practical to control this problem by eliminating air conditioning or by requiring thermostats to be set high. The comfort of occupants should not be compromised by this mold and decay problem. We point this out to explain why not all houses are affected in the same way. No two houses have the same interior-to-exterior temperature differences.

Brick walls are common, why has the problem occurred now?

Two important changes recently occurred in typical construction practice without our understanding their significance. The first was the trend towards installing interior polyethylene sheet vapor barriers. The second was the trend towards more vapor permeable exterior sheathings and housewraps.

Interior polyethylene vapor barriers prevent wall assemblies from being able to dry towards the interior during the summer months. And the trend towards more vapor permeable sheathings makes it easier for water vapor to enter walls form the exterior.

These two changes began to occur during the 1990's. Prior to these two changes, when moisture was driven inwards out of a brick veneer into an exterior wall cavity, the moisture was not trapped within the cavity by an interior vapor barrier. The moisture that got into the wall cavity was able to also get out of the wall cavity through the interior surface finish. The kraft
facing on fiberglass cavity insulation that was typical at the time was not a vapor barrier -- it was a vapor retarder -- so that the flow of water vapor was not stopped.

Polyethylene vapor barriers were introduced to reduce the wetting of exterior wall cavities from interior sources of moisture during the winter months. This they did extremely well and were embraced by building codes and builders almost everywhere. Unfortunately the reduction in drying to the interior caused by these vapor barriers has only recently begun to be understood.

The second change was also significant. Fiberboard sheathings, buildingpapers and housewraps were manufactured to be more vapor permeable.

It is significant to note that the mold and decay problems only occur where a permeable exterior sheathing called fiberboard has been installed. The problems do not occur where a foam sheathing, plywood or OSB has been installed. The reason for this is that the foam sheathing, plywood and OSB are less permeable than the fiberboard and therefore does not allow as much inward migration of water vapor diffusion from the brick veneer moisture reservoir.

Why are not all houses affected? 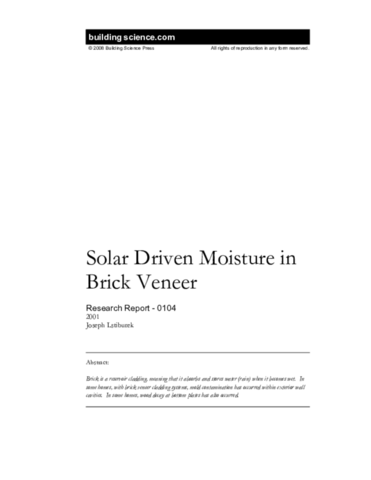