North of the Arctic Circle there are only two seasons—this winter and last winter. Who would ever want to live there? Being human, we can’t help ourselves. We’ve been there a long time. And, we are going there in increasing numbers because of resources—that’s where a lot of them are. We’ve learned a few things. We use snow to create temporary structures. The igloo is the ultimate sustainable structure. We use frozen rivers in the winter as truck interstates to provide fodder for cable TV shows. We never shut machinery off because in the extreme cold we can never start it again. So, how do you build permanent structures in such a miserable place?

The physics are straightforward, but the engineering is not. Moisture flow by air leakage and vapor diffusion from the inside to the outside is a huge concern. Even tiny gaps leaking air can lead to substantial icicles and frost boles. There is no argument that an actual air barrier is essential. The vapor drive when it is 40 degrees below zero1 outside is formidable. This is one climate that needs a real vapor barrier, not a vapor retarder. There is no argument that an actual vapor barrier is essential (less than 0.1 perm). Seemingly insignificant thermal bridges that would be laughable in other climates are a big deal.2  Triple glazing is not an option; it is essential. There is little room for error. 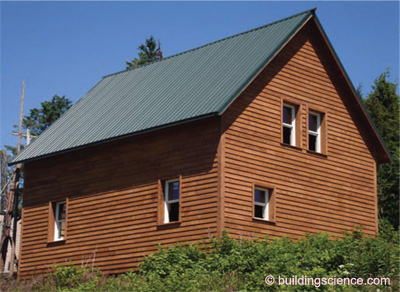 Photograph 1: Extreme Enclosure—“Superinsulated” does not do justice to this house constructed by the Hydaburg Tribe in Alaska that is ultra-airtight and ultra-vapor tight (less than 0.5 ach at 50 Pa [0.20 in. w.c.] and less than 0.5 perms). 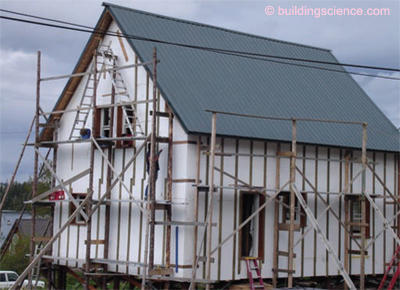 Photograph 2: Exterior insulation—Multiple layers of rigid insulation on the exterior of a wood-frame structure held in place with wood furring strips. Note the inset location of the windows allows the water management layer of the window to connect to the water management layer of the exterior wall (the fully adhered membrane).

We need, in essence, a “perfect” air barrier and a “perfect” vapor barrier. That means using a fully adhered sheet membrane that looks more like a refugee from the roofing industry than a building enclosure housewrap and vapor barrier.3  The engineering problem entails constructing a six-sided cube wrapped with fully adhered sheet membrane with all of the insulation exterior to the membrane. Not just a little bit of insulation, but a lot of insulation. Did I mention a lot of insulation? No penetrations, none at all, are allowed in this sheet membrane. All services must be kept to the inside of the membrane (wiring, plumbing, communications, and HVAC).

The top of the cube is also a big deal. The top of the cube must be watertight but not vapor tight. It also must not blow off and it must deal with snow. Most of the time snow blows off, which is a very good thing. Contrary to popular belief, the arctic does not get all that much snow. It’s just that the snow hangs around a long time. But, we can’t rely on the snow always blowing off, and we can’t rely that we’ll always get only a little bit of snow. So, we have to deal with the potential for ice dams. Did I mention the blow-off part? It can get really windy, and the wind can whip up the snow, and blow the snow into tiny spaces. So, if you have tiny spaces connected to the outside, you should expect snow. The snow particles can get very tiny, like fine sand blowing around in the desert. The desert analogy is not crazy. The arctic is, in fact, a desert because of the small amount of precipitation. It’s just a really, really cold desert.

The sides of the cube are fairly easy to deal with. The inside must be vapor tight and airtight. The outside must be watertight and vapor open. We know how to do this well in other places besides the arctic. Ventilated claddings just rock in this type of environment. 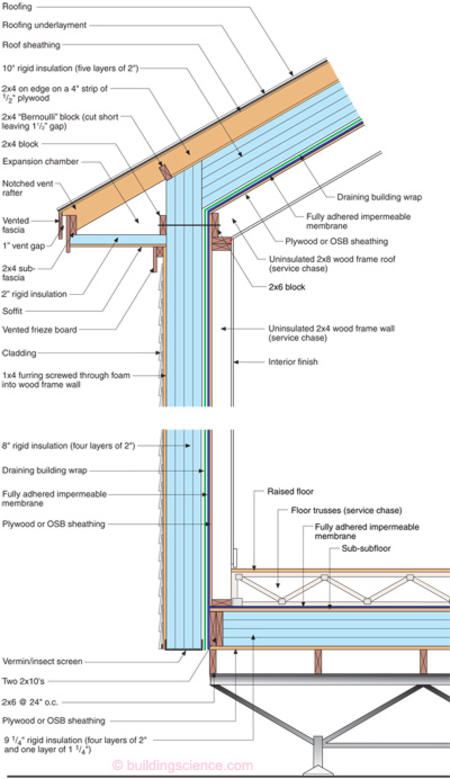 Figure 1: Extreme Enclosure Section—Building supported on space frame. Note the vented frieze board, the vented facia, the insulated soffit, and the Bernoulli blocked soffit expansion chamber to control snow entry. The roof and wall assemblies are drained to the exterior between the exterior rigid insulation and the exterior (to the structure) fully adhered impermeable membrane. This membrane is the air barrier, as well as the vapor barrier for this structure. 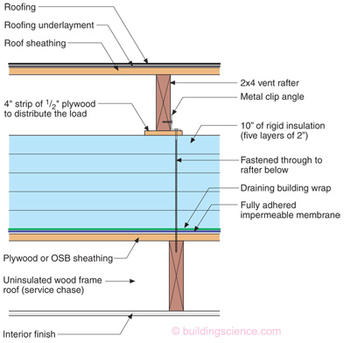 Figure 2: Roof Section—The vent rafters are connected through the roof rigid insulation with a metal bracket and a long roofing screw. Note the 4 in. (100 mm) strip of plywood under the rafter to distribute the load due to the limited compressive strength of the rigid insulation. 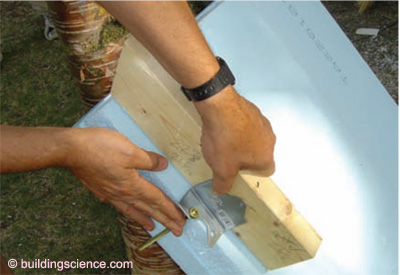 Photograph 3: Ventilation Rafter—The 2x4 (standing proud) is connected through the roof rigid insulation with a metal bracket and a long roofing screw. You can purchase 14 in. (356 mm) long epoxy-coated steel screws. Stay away from stainless steel screws because the heads twist off. Stainless steel tends to be soft. Ask me how I know.

Putting it all together in a system that works and that is constructable is not easy. We have learned elsewhere, in high snow-load areas, how best to deal with ice dams. We need a ventilated roof cladding to deal with the thermal resistance of snow. The roof cladding needs to be at the same temperature as the exterior. When the outside temperature is below freezing, the roof cladding must be below freezing. If it is above freezing, the snow melts, runs to the edge of the roof and freezes. Then, we get big hunks of ice that can fall down and hurt you big time. Oh, they also dam up the melt water and the roof leaks, hence the term ice dam.

Because snow has an R-value4  (remember the igloo?), we need to flush heat away from the underside of the roof cladding using ventilation. That part is easy. What is difficult is keeping snow out of the ventilation space, and then designing an assembly that can live with the snow getting in anyway. Stuff happens. We can go to a long-dead European by the name of Daniel Bernoulli to help us out.

Bernoulli’s equation tells us that if we have a fluid flowing in a pipe, and a sudden enlargement exists in the pipe, there will be a corresponding drop in pressure. If we then shrink the pipe again, we have an increase in pressure. Folks will recognize this as an expansion chamber. We can use the concept of an expansion chamber to control rain entry and snow entry into soffits. If you have a sudden drop in air pressure the air typically gives up the snow or rain droplets it is carrying. By turning the soffit into an expansion chamber, we can collect the snow in the soffit, rather than have it migrate farther up the ventilated roof cavity. Once in the soffit, we can let the snow eventually melt there and then drain the snow melt out. But just in case, because stuff happens, we’ve learned to design the entire ventilated roof cavity to be able to drain snow melt out.

Connecting the roof to the wall is not straightforward either. The walls can cause problems with the roof. Solar radiation heats the outside air immediately adjacent the exterior cladding, as well as the air behind the cladding in the ventilation air space. This warm air rises. We do not want this warm air to get into our ventilation space under our roof cladding as it will heat up the roof cladding. The bottom of the roof overhang must be insulated to keep the solar heated air rising up the exterior walls from melting snow on roof overhangs, and vented facias. The roof ventilation air comes from the edge of the roof assembly, not from under the roof overhang.

The ventilation spaces under the roof cladding and under the exterior wall cladding also serve to compensate for flaws in the interior air barrier and vapor barrier. Yes, they need to be perfect, but sometimes air barriers and vapor barriers don’t quite achieve perfection, and you had better accept that buildings move and age, and the building materials themselves age and, well you get the message. Exfiltrating moisture-laden air and vapor that is diffusing outward eventually end up in these ventilation spaces. Once in these spaces, we can remove the moisture to the exterior. Evaporation, sublimation, and drainage all play a role depending on time of year since that determines the temperature of the relevant surfaces.

Another approach is to drain the wall to the exterior between the exterior insulation and the air/vapor barrier. This works since the drainage gap is warm. Recall that frozen water does not drain. Combining roof and wall cladding ventilation with roof and wall drainage covers most of the bases.

So, we have an ultra-vapor tight and ultra-airtight enclosure that is superinsulated. Let’s put people inside, along with their stuff. Presumably, they will want to live and work as much as they can inside because it is so miserable outside. Yes, you guessed it, they are going to need air. Air for them and for their stuff and for whatever they are doing. We are not going to argue about how much they need. We will leave that for another day. But, it is clear that this air is going to come from the outside.

The problem with getting air from the outside north of the Arctic Circle is that it is really, really cold and the more of it you bring in or the more of it that you need, the more of a problem it is with respect to comfort and energy. Air-to-air heat exchangers5 are essential. In fact, it makes sense to have two of them in series, it is that ugly. They also freeze up and must be defrosted on a regular cycle every hour when it is really cold. 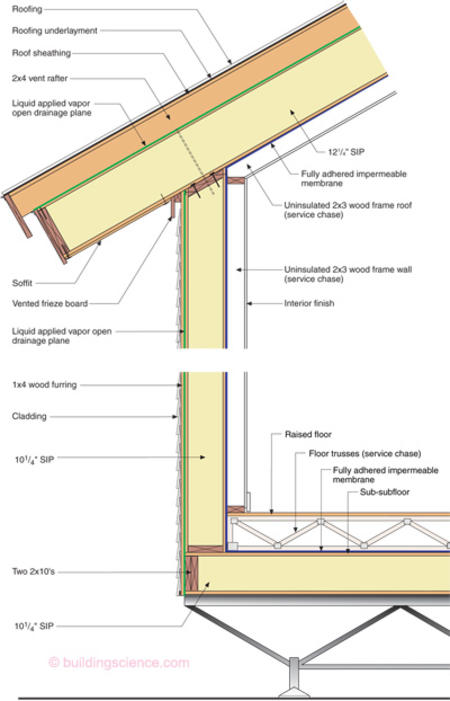 Figure 3: Extreme Structural Insulated Panel Section—A soffit expansion chamber is not used in this detail. However, the ventilated roof cavity is drained and water tight. Note the liquid applied vapor open drainage plane. Most building wraps flutter if they are not supported on both sides. This solves that problem.

How do you provide heat to an ultra-airtight enclosure? Well, if you burn something, you had better figure out how to get the products of combustion out and how to get combustion air to the thing you want to burn. Sealed combustion appliances are the only option. Folks who try other approaches usually end up as a footnote in the annual Darwin Awards. The good news is that we have lots of systems that work. They are also extremely efficient.

An even more interesting problem is how to deal with sewage. It tends to freeze. Sewage pipes, permafrost, buildings that move, and extreme cold leads to lots of crap. This is a complex problem that we will leave to another day. I will say that electrically heated waste lines are common, as well as above grade superinsulated and heated septic tanks and leach fields. Unfortunately, so are open sewage ponds and sanitation reminiscent of third-world nations. 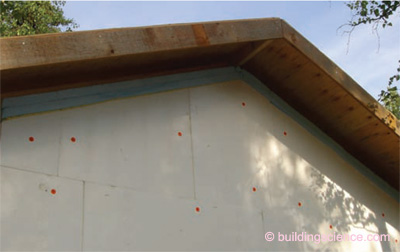 Photograph 4: Mock-up Constructed First—Things never go together perfectly the first time, which is why test huts, test sections, and mock-ups are essential. Again, ask me how I know. Failure is not an option north of the Arctic Circle. Skill testing question for the geeks in the audience: what are the red dots? 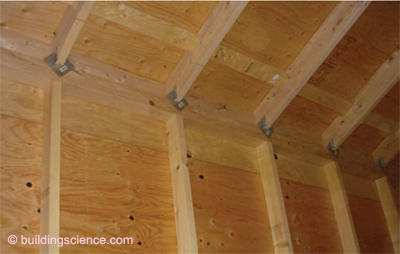 Author’s Note
Much of the fundamental research work demonstrated in the building constructed by the Hydaburg Tribe was developed under the U.S. Department of Energy’s Building America Program. 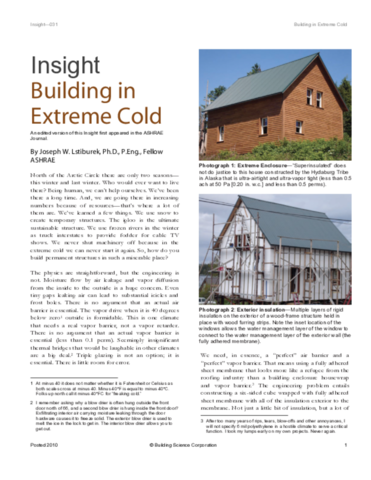