CP-1302: Monitoring of Two Unvented Roofs with Air-Permeable Insulation in Climate Zone 2A

Unvented roof assemblies can bring attic mechanical systems into conditioned space, negating ductwork losses. However, in previous work, unvented roofs with air-permeable (fibrous) insulation, instead of air-impermeable insulation (spray foams) have shown localized moisture accumulation at the ridge. This research is a test implementation of two unvented roof assemblies insulated with air-permeable insulation (netted and blown fiberglass or adhered fiberglass) in hot/humid climates. One test roof is located in Houston, TX and has asphalt shingles; the other is in Orlando, FL, with concrete tile; both are in Climate Zone 2A. Given that localized moisture accumulation and failures occurred at the ridge in previous unvented roofs, a diffusion vent (open to water vapor but closed to airflow) was installed at the highest points in the roof assembly to allow for the wintertime release of moisture. The diffusion vent is an opening at the ridge and hips covered with a water-resistant but vapor-open membrane. As a control comparison, portions of the roof were constructed as a typical unvented roof (self-adhered membrane at ridge).

Collected data indicate that the diffusion vent roof shows greater moisture safety and less wintertime moisture accumulation than the conventional, unvented roof design. The unvented roof had winter periods of 95%–100% rh, with other sensors indicating possible condensation; high moisture levels were concentrated at the roof ridge. In contrast, the diffusion vent roofs had drier conditions. In the spring, as outdoor temperatures warmed, all roofs dried well into the safe range (10% MC or less).

Unvented roofs (also known as cathedralized attics) are an established concept in residential building; such roofs are typically implemented with spray polyurethane foam (SPF) at the underside of the roof deck (Rudd and Lstiburek 1998; Lstiburek 2006; Lstiburek 2011). Primary advantages to this construction are that (a) the attic ductwork and heating, ventilating, and air-conditioning (HVAC) system are brought into the thermal and air barrier of the conditioned space, and (b) air leakage at the ceiling plane (often complicated by interior detailing) is eliminated, which typically results in improved overall airtightness. Advantages in hurricane-prone areas include reduced wind-driven rain entry, by eliminating attic vents, and potentially reduced hurricane blow-off issues, due to differential pressurization. Disadvantages include higher first cost and greater surface area (conductive losses); the latter factor is often negated by eliminating duct leakage to the exterior.

This research covers two test implementations of unvented roofs in hot/humid climates (CZ 2A): one in Houston, TX, with asphalt shingle roofing, and the other in Orlando, FL, with concrete tile roofing. The roofs were insulated with air-permeable fiberglass insulation, with a diffusion vent detail at the ridge to allow for wintertime removal of accumulated moisture. One goal of the research was to determine the assembly’s resistance to condensation, or the design’s moisture safety. This research has an additional benefit of potentially reducing the first cost of unvented roofs by eliminating SPF, which is a higher-cost material than fibrous insulations. This research is covered in detail in Ueno and Lstiburek (2015a; 2015b).

The authors made discoveries on the hygrothermal behavior of unvented roofs in hot/humid climates during field implementation; several of these roofs were built in Houston, TX circa 2001 (CZ 2A). The typical roof assembly was asphalt shingle, roofing felt, oriented strand board (OSB) sheathing, and netted and blown cellulose insulation. During the first fall season of operation, a homeowner reported seeing moisture condensation and dripping from the ridge of the unvented attic, from the interior. Field investigation (Figure 1, left) revealed elevated wood moisture contents (MCs) at the ridge and evidence of previous condensation (i.e., rusted staples). The cellulose insulation at the peak had a noticeably “packy” or compactable texture as opposed to the fluffy texture of dry cellulose, indicating previous wetting (Rose and McCaa 1998). This failure was localized at the peak/ridge of the roof. These moisture issues were remediated by removing the insulation at the roof ridge, which solved the problem, but with an associated thermal penalty.

A similar issue arose in two production homes in Jacksonville, Florida (CZ 2A) circa 2000. Again, the roof assembly was asphalt shingles, roofing felt, OSB sheathing, and netted and blown cellulose insulation. During a site visit, the cellulose and roof sheathing were wet to the touch, and the steel truss plate was corroded; however, the wood had not decayed (Figure 1, right). In response, the insulation was removed near the ridge (roughly 2 ft [610 mm]) to increase surface temperatures of the roof sheathing. This roof has been rechecked in 2003 and 2014; roof sheathing conditions remain dry.

Similar localized ridge problems (colloquially referred to as ridge rot ) have been documented in unvented compact cellulose roof assemblies in northern California (CZ 3C). Lower portions of the roof were dry and undamaged.

An overview of the use of dense-pack cellulose insulation (Lstiburek 2010) shows examples of the problems that can occur when using the material in compact roof assemblies. A comprehensive analysis of the use of dense-pack insulation of compact roofs (Schumacher and LePage 2012) noted the potential for interior air-leakage-sourced condensation in cold and mixed climates. Their hygrothermal analysis suggests that failures are not endemic in houses retrofitted with densepacked roofs, because only moderate airtightness is achieved. Therefore, interior moisture generation is sufficiently diluted by wintertime air leakage to result in low wintertime interior relative humidity (RH) levels. 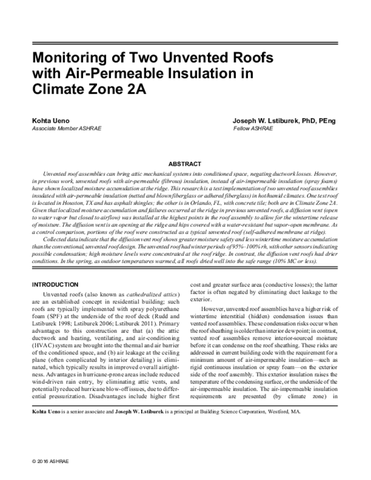