ZETA Communities is a startup company that has a mission of building energy efficient and/or net zero modular houses at costs competitive with local construction. They recently completed their first prototype, the live-work townhome: an infill project located in a mixed industrial/artist/residential urban neighborhood, within walking distance of a mass transit station. The plan provides a ground floor work studio, 2 bedrooms, light-filled great rooms, decks, and sustainable landscaping, in addition to a one-car parking garage.

BSC worked with ZETA and Daniel Smith & Associates (DSA), the architects who were previously associated with the project, and have extensive experience in sustainable design and passive solar projects. Energy analysis showed a 45% savings with respect to the Benchmark when not including the photovoltaic system; inclusion of the 5.4 kW PV system showed a savings of 95%. The analysis also showed near-net zero performance, assuming Building America operating conditions; prudent operation by a homeowner will likely result in net zero performance.

The project has received a LEED-H Platinum rating, 217 Green Point Rating, and EPA’s highest indoor air rating, Indoor airPLUS. The house is currently under contract, and the owner is scheduled to take occupancy in March 2010. 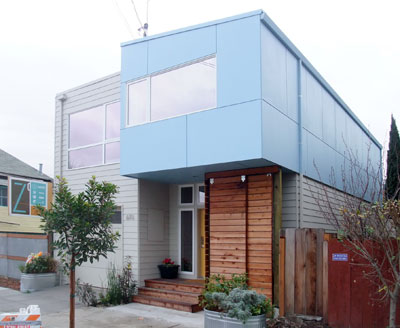 The first goal of this project was to achieve a 40% savings relative to the Building America Benchmark. The mild climate of the San Francisco Bay Area and the townhome floor plan, made it difficult to reach high savings. All enclosure upgrades only achieved a 14% savings. These measures included airtightening, duct leakage reductions, low-density spray foam cavity insulation, R-5 rigid foam sheathing on exterior walls, and triple glazed windows. The addition of improved HVAC (16 SEER/9.5 HSPF air source heat pump) only increased the total savings to 18%.

The remaining loads (domestic hot water, lighting, plug and appliance loads) were still very significant. The DHW load was reduced substantially by the use of a heat pump water heater located in the garage, as well as a drainwater heat recovery system, which captures second floor shower and sink drainwater heat, and uses it to preheat incoming mains water.

The design actively uses thermal mass to reduce space conditioning energy use. The conditioned crawl space is used as thermal mass (walls and slab floor); the air handler distributes air through this space, which is then “bled” to the first floor registers.

The photovoltaic system was sized to account for the remaining annual electric load. 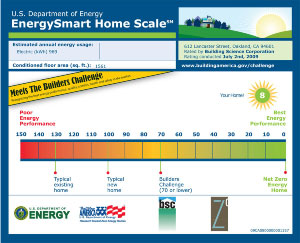 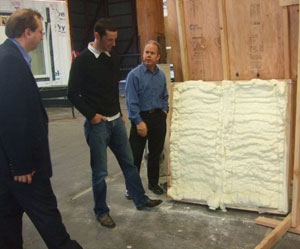 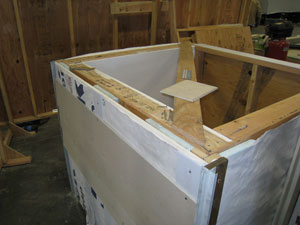 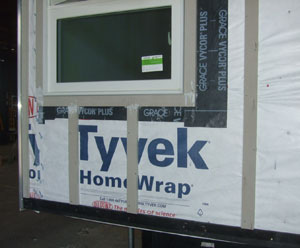 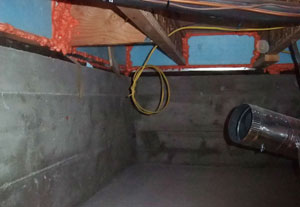 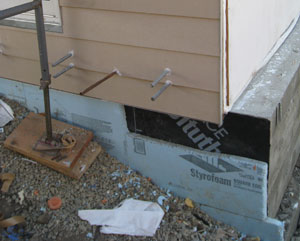 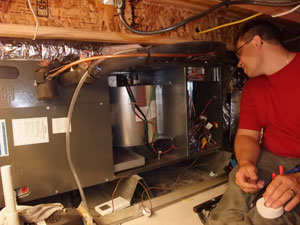 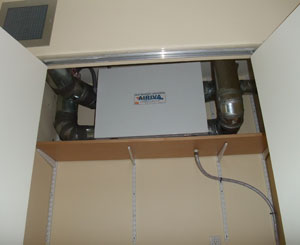 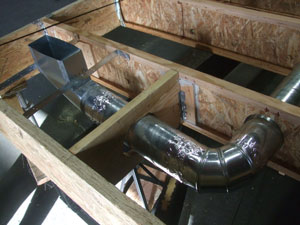 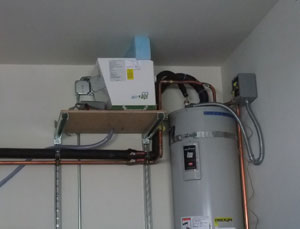 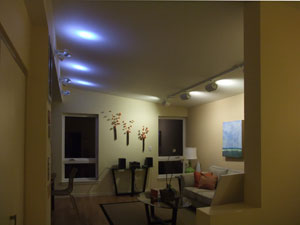 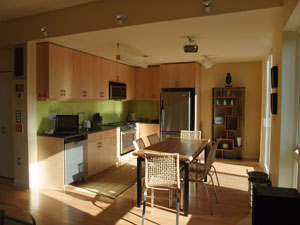 Prior to the start of construction, BSC participated in several design charrettes with ZETA, fine-tuning the enclosure design, the mechanical systems, the zTherm controller, and evaluating various measures for cost-effectiveness. The units were factory-built, and the modules were set on site. Site finishing and integration work followed, which included the installation of all mechanical equipment.
Water management was a priority for both the design team and the builder; critical measures included pan flashings under all windows (both membrane and sheet metal), a drained and ventilated cavity behind the siding, and exterior foundation water management details. BSC provided step-by-step flashing details for the window installation.

In addition to BSC’s oversight, a local third-party tester was retained by ZETA for LEED and ENERGY STAR® certification; all three groups communicated their findings and resulting concerns, working together to solve problems.

BSC travelled to the site on three different occasions during the construction and commissioning process, both testing and providing feedback to the builder. The zTherm controller was a custom-designed piece of equipment; integrating it with the functions of the house required an effort from all parties, but was eventually resolved.

After completion, testing was done to determine if the house met BSC’s Building America Performance Criteria. The air leakage target was 2.5 in2 per 100 ft2 of enclosure area; the Live/Work Townhome easily met targets, at 1.5 in2 per 100 ft2. Total duct leakage was measured at 125 CFM at 25 Pa (8% of floor area), which is higher than desired, but expected in sheet metal systems. However, leakage to the exterior was below measurement limits, meaning that this ductwork leakage was to the interior, with minimal energy penalties.
In addition to these basic tests, BSC performed tests of the drainwater heat recovery system, the HVAC system’s interactions with the “thermal basement,” the heat pump water heater, and estimates of the PV array performance.

BSC also installed a long-term data collection system, which will be used to measure energy use and operating conditions of the house while occupied for one year. The measurements include runtime for heating, cooling, and air handler; interior, exterior, and garage temperatures and relative humidity; space conditioning energy use, and domestic hot water electricity use. 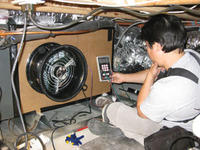 BSC will download and analyze the data being collected, to both monitor energy use, and to determine whether the algorithms used in the zTherm controller are operating effectively. In addition, BSC will monitor energy bills over the next year, to monitor consumption patterns. We expect to communicate with the homeowners over the year, to learn about their experiences with the installed systems, and provide feedback on energy use. NREL is simultaneously collecting data at this site, including overall energy use and photovoltaic output. BSC looks forward to continued work with ZETA at this project. 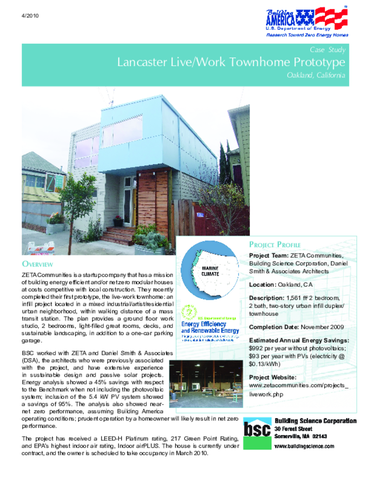