Project Home Again is a development in New Orleans, Louisiana, created to provide new homes to victims of Hurricane Katrina. BSC acted as a consultant for the project, advocating design strategies for durability, flood resistance, occupant comfort, and low energy use while maintaining cost effectiveness. These techniques include the use of high density spray foam insulation, LowE glazing, and supplemental dehumidification to maintain comfortable humidity levels without unnecessary cooling. Stringent airtightness goals were achieved by the project, helping to meet the Builder’s Challenge targets set by Project Home Again. Floor plans, enclosures, and heating, ventilation, and air conditioning attributes are quite similar among different homes in the project.

Project Home Again is a development in New Orleans, Louisiana, created to provide new homes to victims of Hurricane Katrina. Building Science Corporation (BSC) acted as a consultant for the project, advocating design strategies for durability, flood resistance, occupant comfort, and low energy use while maintaining cost effectiveness. These techniques include the use of high density spray foam insulation, LowE3 glazing, and supplemental dehumidification to maintain comfortable humidity levels without unnecessary cooling. Stringent airtightness goals were achieved by the project, helping to meet the Builder's Challenge targets set by Project Home Again. Floor plans, enclosures, and heating, ventilation, and air conditioning attributes are quite similar among different homes in the project.

While construction is ongoing, several phases of the project are already complete and have been occupied for periods up to two years. BSC arranged to receive the monthly utility bills of all completed projects so that ongoing performance of the homes could be monitored. At least one year of utility data have been collected for 19 of the homes during the same time period, January–December 2010. These yearly energy use data are analyzed and compared to various
benchmarks, including country-wide and regional home energy use averages, 2030 Challenge targets, and the modeled B10 Benchmark. Both BEopt and EnergyGauge USA models were created for each of the home designs, assuming B10 Benchmark values for attributes controlled by users, including temperature set points and miscellaneous loads.

Most of the 19 homes utilized less source energy than the U.S. and regional averages. None of the homes' energy use intensities achieved the stringent 2030 Challenge target of 16.6 kBtu/ft2/yr. All homes achieved Home Energy Rating System ratings below 70 based on their design and post construction blower door test results, achieving the Builder's Challenge goal.

BEopt was used to optimize costs. Although the actual design fell reasonably close to the lowest cost curve, components such as spray foam insulation over more traditional options increased costs. Independent of energy use or installation cost, the flood resistance of spray foam insulation was an important factor in its selection.

The supplemental dehumidification used by the project could not be modeled with BEopt or EnergyGauge USA software, so an estimation of its contribution to energy use was calculated and added to model results for comparison. Actual home energy use was found to be 95%–208% of model predictions. The various reasons for this discrepancy are discussed. Monthly and yearly energy use tabulations suggest that base miscellaneous loads are underpredicted by models. In homes with high-performance enclosures, heating and cooling loads are greatly reduced, amplifying their relative effects, which were estimated to account for 53%–81% of total energy use in the homes.

One major factor examined as it relates to the high miscellaneous loads is the supplemental dehumidification which was not installed according to BSC’s specifications. Cooling-decoupled dehumidification is a strategy promoted by BSC to improve occupant comfort in hot, humid climates without unnecessary cooling during the swing seasons. Higher dry bulb temperatures can feel more comfortable if humidity levels are controlled. However, it was discovered that
after installation many of the systems had erroneously been set to maintain relative humidity set points in the mid 30s instead of the 55%–60% relative humidity recommended, and the dehumidifiers were installed such that the airflow short-circuited through the central air handler unit when there was no thermostat call for heating or cooling. This contributed to additional energy use by the systems and increased cooling loads. Although several of the homes’
dehumidification set points were corrected, this issue and the comfort conditions achieved by the systems are still being monitored by BSC. However, an initial comparison to available data from Phase III homes (without supplemental dehumidifiers) shows very similar yearly energy performance to the first two home phases that include supplemental dehumidifiers. Because energy use of the first two home phases also includes periods of time when some of the dehumidifiers are known to have been over-dehumidifying, current data suggest that the operation or misoperation of the dehumidifiers is a relatively minor factor in the homes’ high energy use. Other miscellaneous uses are likely to be larger contributors.

The significant influence of user-controlled factors (set points, miscellaneous loads) in high performance home energy use underlines the importance of homeowner education. After durable, high thermal resistance enclosures and efficient heating, ventilation, and airconditioning systems are installed, a low-energy home is dependent on user behavior. BSC will continue to monitor Project Home Again and to promote low-energy operational strategies as more homes are completed. In addition to continued monitoring of utility data from the project, future work involves more detailed submonitoring of energy end use in a smaller number of homes to glean more insight into the performance of building system components and miscellaneous end uses.

Building Science Corporation (BSC) began working with Project Home Again (PHA) in New Orleans, Louisiana (hot-humid climate zone) in 2008. PHA is constructing new community homes in the Gentilly neighborhood of New Orleans. This community will demonstrate advanced building practices that promote energy efficiency, durability, and sustainability, and that maintain a comfortable living environment. The PHA community is a culmination of BSC and PHA efforts to integrate advanced building technologies into a production environment.

PHA (www.projecthomeagain.net/) is a not-for-profit development that was started by the Riggio Foundation with the goal of providing homes to those whose homes were destroyed or badly damaged by Hurricane Katrina. From the website: “To qualify for a Project Home Again House, an applicant must have owned a home in Gentilly prior to Hurricane Katrina and be unable to amass the resources needed to repair and reoccupy that home.” The potential homeowners must be willing to “swap” their current properties for PHA homes and must live in the new PHA homes for at least five years. Potential homeowners are responsible for paying property taxes, insurance, fuel, and general maintenance and be employed in the New Orleans area. PHA is selecting potential homeowners who meet these criteria. Approximately 70 homes have already been completed as part of different construction phases. Phases I, II, III, and IV are complete; construction is in progress on Phases V and VI. Funding is expected to continue into later phases of this successful development. In Phase II, the home designs are known as Gertrude, Templeton, and Camille. These singlefamily homes are all one story with three bedrooms, ranging in size from 1,213 to 1,316 ft2 (see Figure 2). Table 1 summarizes the building enclosure assemblies used for Phase I of this project.

Each PHA Phase I house is elevated at least 3 ft off grade with blocks on a grade beam foundation. The crawlspace is vented and the perimeter fenced off with low-cost wood latticework. This will allow floodwater to pass through and is inexpensive to fix should the latticework break. The two story plans have cantilever sections of the second floor elevated 11 ft. with a carport below. A metal flashing piece is installed over each pier as a capillary break, with a borate-treated sill plate.

Floor framing is pressure-treated borate 2 × 10s at the traditional 19.2 in. o.c. spacing and the subfloor is ¾ in. CDX plywood. The architect did not upgrade to 24 in. o.c. because of the increased cost and low availability of 7/8-in. subflooring that would be needed to ensure floor stiffness at that joist spacing. The joist bays were insulated with 2 in. of high-density spray foam (R-13) to the underside of the tongue-and-groove CDX subfloor.

Exterior walls are 2 × 6 pressure-treated borate studs at 24 in. o.c. This “advanced framing” design reduces the amount of wood used in the wall and reduces thermal bridging caused by the wider stud spacing (Lstiburek 2010). The stud cavity was insulated with 3 in. of high-density closed-cell spray foam sprayed up against the ½-in. oriented strand board (OSB) wall sheathing. Additional advanced framing elements such as single top plate and two stud energy corners were not utilized in this project because of structural requirements. The architect chose to design the floor plans to conform to the Wood Frame Construction Manual (AF&PA 2006) for a 130 mph wind zone. The Wood Frame Construction Manual design document addresses few upgrades that full optimum value engineering framing, or advanced framing, call for, such as single top plate or two stud corners, but will allow for 2 × 6 @ 24-in. o.c. wall construction. It is possible to structurally design a house to comply 100% with all the advanced framing recommendations. However, the architect would have had to hire a licensed structural engineer to analyze the floor plans and calculate a design that includes the full optimum value engineering package. The extra money and time involved in doing so were not cost effective for PHA.

The ½-in. OSB served as a structural sheathing on the entire exterior wall. A woven high-density polyurethane (HDPE) house wrap was installed over the OSB in place of the recommended spun HDPE house wrap. This was due to cost concerns; the spun house wrap was priced three times higher than the woven house wrap. Furring strips made of cut strips of 3/8-in. XPS were recommended to provide a drainage space, but the architect deemed it unnecessary. Pre-primed fiber cement board was installed directly onto the woven house wrap.

Closed-cell spray foam was utilized as the air and thermal barrier for the entire enclosure. BSC highly recommends a “flood recoverable” enclosure design for homes in high risk flood areas. A spray foam enclosure has the ability to dry out after a wetting event; therefore, the insulation is not required to be removed (Lstiburek 2006).

The roof has R-30 high-density spray foam (4.5 in.) installed under the roof deck to create an unvented attic. Light color hurricane rated asphalt shingles were installed over #30 felt roofing underlayment over 5/8-in. CDX roof sheathing. The roof sheathing has the joints taped with butyl-based, adhesive-backed flashing strips. The building code requires that intermittently occupied spaces with exposed spray foam must have an ignition barrier. Therefore, PHA sprayed an intumescent coating called FlameSeal over the entire closed-cell high-density installation in the unvented cathedralized attic.

The windows installed at PHA Phase I are vinyl frames with LowE2 spectrally selective glazing. The low SHGC of 0.30 reduces the solar gain, resulting in a smaller rightsized heat pump and lowered annual space conditioning energy consumption. This glazing technology has some secondary benefits as well, such as reducing ultraviolet (UV) damage on interior floors or fading on furniture.

The air infiltration rate was very low, commensurate with the Building America infiltration goal of 2.5 in.2 of free area per 100 ft2 of enclosure. The high density spray foam on the entire enclosure contributes much to this. The low-expanding spray foam that is installed between the window frame and the rough opening also helps. The high-density spray foam is an excellent air and thermal barrier system for this application. It is critical in the floor assembly because the low permeability rate of the foam will resist any upward vapor drive. The spray foam will also keep the subfloor warm and will minimize any condensation potential. PHA was careful to avoid impermeable floor coverings in the homes to prevent any moisture from being trapped and potentially condensing. This will have a positive effect on the durability and the indoor air quality of the house (Lstiburek 2008).

Please refer to Figure 3 for the building section. 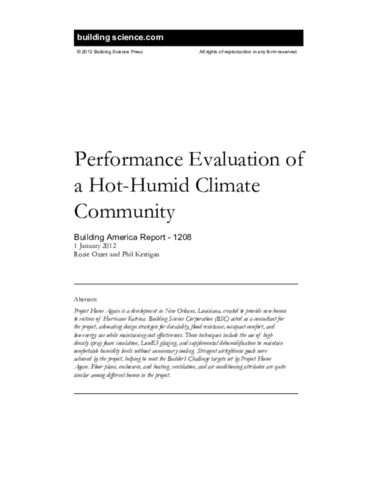