Housing built for World War II veterans duting the 40's, and 50's poses serious technical, institutional, and health-related challenges for housing managers, policy makers, and residents alike. This housing is easy to identify in the poor neighborhoods of old industrial cities such as Chicago, Detroit, Philadelphia, and Boston. The apartments are relatively small (500-900 ft2 for two- to four-bedroom unit) and are clustered in mutiple buildings in large low-rise developments. The buildings are generally two or three stories high and contain 10 to 30 apartments each. The developments range in size from several hundred to several thousand apartments.

Years of deferred maintenance have created a housing crisis that includes extraordinary deferred capital needs, high utility costs, and unhealthy indoor living conditions. Major capital investments are required to make this housing healthy, safe, and comfortable once again. For example, the Boston Housing Authority owns and manages about 10,000 Veterans Era apartments. The cost to fully upgrade these apartments would be more than $1.5 billion. Solutions, both short-term and long-term, for the mositure problems that we found need to be addressed within the broader context of the major investments required to revive this housing stock.

At the invitation of the individual hosuing authorities, we studied moisture problems at three Veterans Era housing developments, located in Cleveland, Ohio; Lawrence, Massachusetts; and South Boston, Massachusetts. The moisture-related problems in these developments included mold growth, window condensation and deterioration, leaking pipes, and water infiltration through the building envelope. The Cleveland case study is an example of one of the first mold remediation efforts in public housing. The Lawrence project is an example of a major energy retrofit that exacerbated existing moisture problems. The South Boston development is the focus of a resident-driven health and housing survery and an installed energy retrofit similar to the Lawrence project.

The moisture problems in Cleveland's housing included a sensation of dampness in the apartments, window condensation and deterioration, water damage to plaster walls, and mold growth. The apartment buildings are two-story uninsulated masonry structure built just after the end of World War II. The 15 buildings contain 150 apartments, ranging in size from 800 to 900 ft2. The space conditioning systems are hydronic fin tube radiators connected to a central heating system located in an attached boiler room for each building. No controlled mechanical ventilation, such as exhaust fan systems in kitchens or bathrooms, was installed.

The housing authority had recently installed wood-framed replacment windows in the development, because tenants had complained that the old windows were leaking rainwater. Reduced air leakage through the new windows, however, caused moisture condensation on the windows and mold on the walls and ceilings.

Occupant loading in the relatively small apartments was high, based on visual inspection. Occupant activities also implied high moisture generation in the apartments. Specific examples include hanging up laundry to dry indoors and heavy use of the installed gas stoves for cooking with inadequate kitchen exhaust ventilation (see Table 1). We observed mold growth at exterior corners and condensed water and water stains on window frames. The window stains indicated significant current and past condensation on the widow glass.

The recommended solution was to reduce interior vapor pressure and to increase interanl air flow.

Reduce interior vapor pressure. Installing controlled mechanical ventilation in each apartment would dilute interior moisture and other pollutants. We recommended installing exhaust-only ventilation to provide approximately 15 CFM per occupant, extracting air form the washrooms and stairwell/hallway areas, and exhausting this air to the exterior via ductwork. Ventilation should operate continuously in order to maintain interior moisture levels between 30% and 45% relative humidity at 72°F during the winter months.

Increase interior air flow. We recommended undercutting all interior doors 21/2 inches (from the top of the floor covering to the underside of the door) to promote air change in secondary rooms. The continuously operating exhaust fan would then induce 2-3 Pa pressure differences necessary to ventilate rooms. Exterior air would enter the rooms and pass into the common areas. When these recommendations were followed, the problems were eliminated. . . 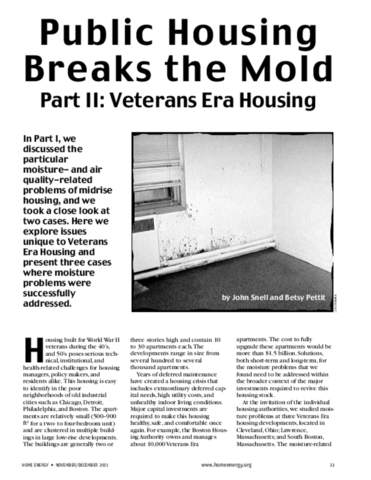