How do you insulate uninsulated masonry buildings on the inside? Carefully. There I go again with the obvious. It is trickier to do it on the inside. But it is often less expensive than insulating them on the outside. True, you give up space, but nothing comes without some type of trade off. The big concern is not to screw up the durability or to create moisture problems where none have existed prior to “improving” the enclosure by insulating it.

Then, if you get past the concentration of rainwater part on the exterior how do you stay out of trouble on the interior when you insulate? What type of insulation works? Well, they all work, sort of. It depends…2

We need to start somewhere and one place to start is to ask where the building is? Is it in a cold enough climate that freeze-thaw is a risk? And not only does it have to be cold enough but does it get wet enough when it is cold enough. Ottawa sucks. Edmonton, not so much. Edmonton is colder than Ottawa, but much drier. Hard to screw up in Edmonton. Easy to screw up in Ottawa. Kinda indicative of the Canadian political system3. In the US New York is much more forgiving than Boston. Note that we are talking freeze-thaw here not sociology.

Hygrothermal regions are a big deal as is precipitation (Figure 1 and Figure 2). Here comes a “Joe Rule”. You only worry about freeze-thaw in “Cold Climates” (or colder) that have “Moderate” (or higher) amounts of precipitation. Cold Climates are defined more precisely as IECC Climate Zone 5 or higher if you are a Yank. In Canada a Cold Climate is everywhere except Vancouver4. Note that Boston is in IECC Climate Zone 5 but New York City is not. You can get away with stuff in NYC that you cannot in Boston. 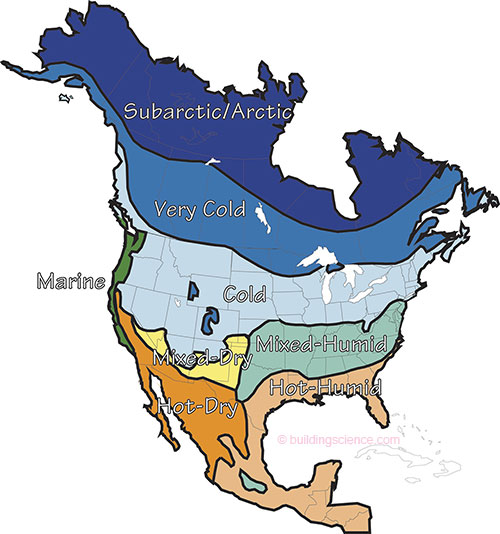 Figure 1: Hygrothermal Regions—From “BSD-106: Understanding Vapor Barriers”.
You should worry about freeze-thaw in “Cold Climates” (or colder) that have “Moderate” (or higher) amounts of precipitation. Cold Climates are defined more precisely as IECC Climate Zone 5 or higher if you are a Yank. 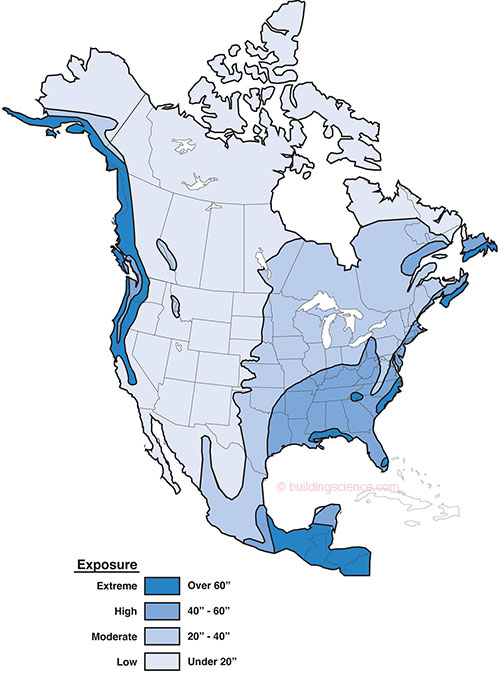 So lets say you are in a place that you should worry about freeze-thaw? Now what? OK, now we look a concentration of rainwater. This takes judgment and experience. Relax. We can do this. Old architects really got it right. We just need to remind the youngsters. One of my favorite all time buildings is at my alma mater the University of Toronto (Photograph 1). Look at all the drip edges—at roof edges, at window openings, between floors. Notice that they are working. How can you tell? No stains. Look at this building carefully because it is an example of “what is good”. 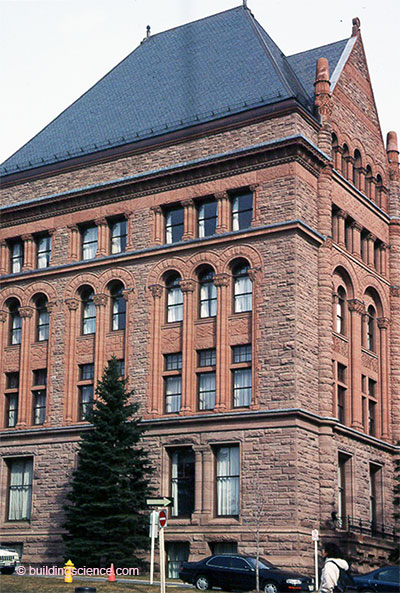 Photograph 1: Getting It Right—Classic building at University of Toronto “Romanesque”. Look at all the drip edges – at roof edges, at window openings, between floors. Notice that they are working. How can you tell? No stains. Look at this building carefully because it is an example of “what is good”.

You want to see stuff that is not good? Look at Photograph 2. Pretty obvious, eh? How about Photograph 3 and Photograph 4? Windows are places where water is concentrated. Why? Well, large expanses of glass don’t absorb water. Water runs down them and ends up at corners that are typically “inset” with surfaces that don’t slope. It gets worse, the windows themselves leak and act as “syringes” for “liquid crack” that inject poison into the body of an assembly5. The openings need drip edges, end dams, back dams and slopes and kerfs. You want to know how to do it right? Go to Ireland and look at real old stuff (Photograph 5) and not so old stuff but still old (Photograph 6). 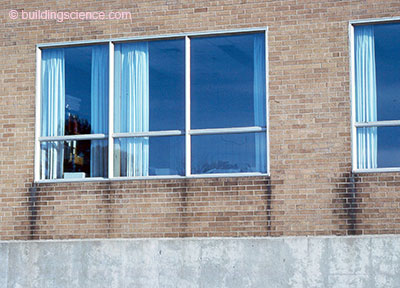 Photograph 2: Getting It Wrong—Look at the stains. Large expanses of glass don’t absorb water and water runs down them and ends up at corners that are typically “inset” with surfaces that don’t slope. It gets worse, the windows themselves leak. Look at the bottom of the mullions where they meet the sill. 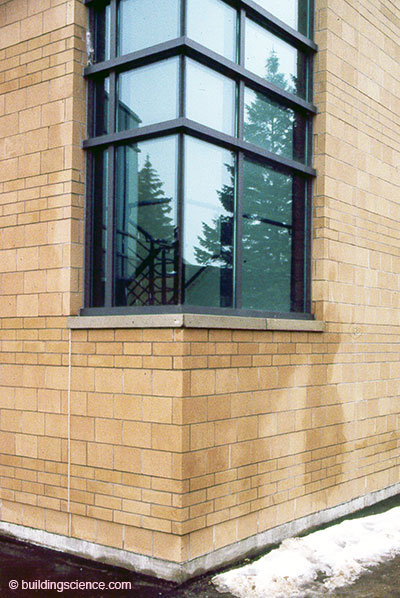 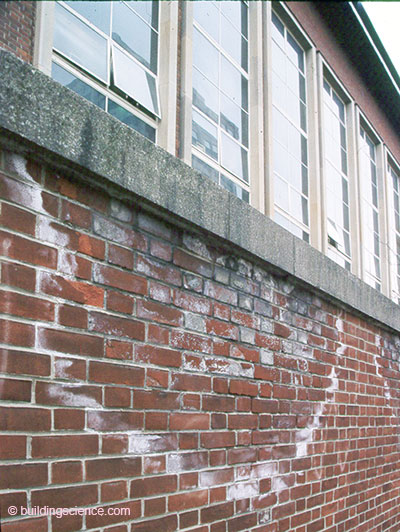 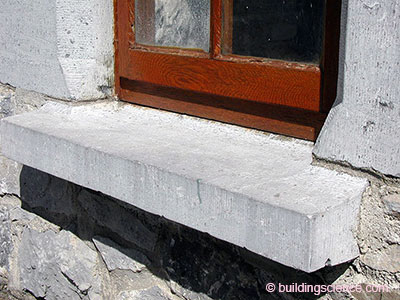 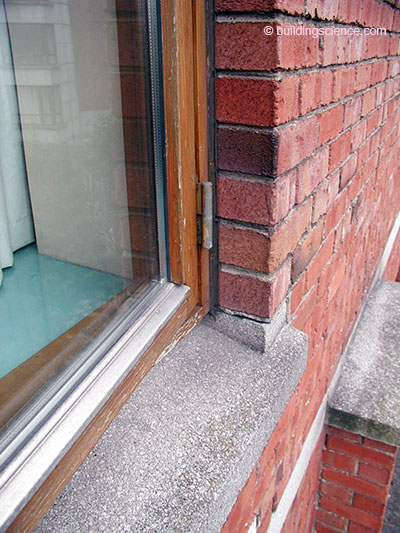 Photograph 6: Not So Old Irish Stuff—Still beautiful. Still has it all. Still a wow. Some of this traveled across the pond with the Irish migration. And then it was forgotten. Time to resurrect this bit of Irish history.

What if you have a building that does not have this neat stuff? Well you can add it. And you can typically add it in such a way as to not irritate the historical preservationists.6 Check Photograph 7 and the detail that was used to make the difference (Figure 3). Reversible but critical to adding decades to the longevity of the façade. 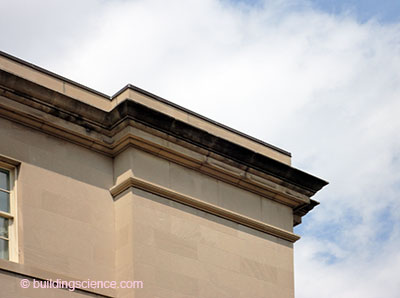 Photograph 7: Courthouse in Washington—Can’t tell you which one or I will end up in jail. And not just any courthouse—an unbelievably beautiful courthouse—but a parapet without a drip edge. Look at the stains. Criminal. The fix is in Figure 3. 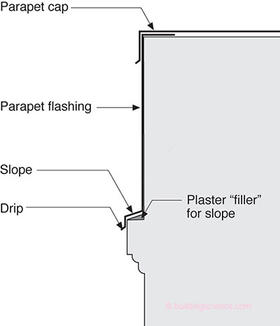 Figure 3: Retro Parapet Drip Edge—Reversible but critical to adding decades to the longevity of the façade.

Ok, so we do the drips, the flashings, the end dams, the back dams, the slopes, the kerfs, the parapet caps as unobtrusively as possible. And we should do it everywhere not just in a “Joe Rule” climate. It is a really, really good idea, always, always. But what about the condition of the brick or masonry?

The next place to go is to figure out the condition of your brick. We are going to focus on brick here but the lessons hold for other stuff. You are going to find good brick, ok brick and crappy brick. How can you tell? You go look at it. It will be obvious7. The good brick you clean and be done. The ok brick you repoint. The crappy brick you stucco. Stucco? Yes. In the rest of the world the way that brick buildings are preserved is by stuccoing them (we were here earlier as well: “BSI-013: Face-Lift for Old Buildings”). Most of the old stuff in Europe is now stuccoed. The Romans started it...according to folks who live in Rome. The Greeks say they did it first and that the Romans stole the idea. Maybe the Sumerians did it first. Probably the Sumerians. For fun mention that to your historical preservation consultant just for the entertainment value alone.

One of my all time favorite projects was an old brick factory that was converted to seniors housing. It had “good brick” on the street side. “OK brick” on the side sides. And “crappy brick” on the back-side. All the drips, the flashings, the end dams, the back dams, the slopes, the kerfs, the parapet caps were added as unobtrusively as possible.

The street side brick was cleaned (Photograph 8). Notice the fabulous parapet that was added with the drip cap. The brick on the side sides were repointed and the brick on the back-side was stuccoed with a polymer cement slurry (Photograph 9). The thin vapor open hydrophobic cementitious layer allows the texture of the brick joints to show through. 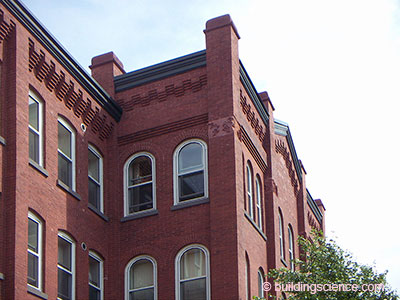 Photograph 8: All Time Favorite—An old brick factory converted to seniors housing with “good brick” on the street side. All the drips, the flashings, the end dams, the back dams, the slopes, the kerfs, the parapet caps were added as unobtrusively as possible. The street side brick—shown here—was cleaned. Notice the fabulous parapet that was added with the drip cap. 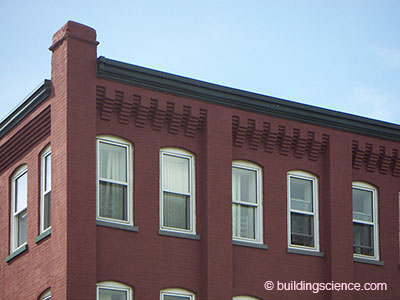 Photograph 9: Back Side Brick—Brick on the back side was stuccoed with a polymer cement slurry. The thin vapor open hydrophobic cementitious layer allows the texture of the brick joints to show through. It is real important that the vapor transmission of the cementitious layer is greater than 10 perms. If not the coating will bubble and blister and peel. An even more conservative approach is the European one—just add a direct-applied traditional stucco and forgo the historic tax credit.

Side note: Basement foundations can be a bear. Use the approach in Figure 4. It works everywhere (see “BSI-011: Capillarity–Small Sacrifices”). 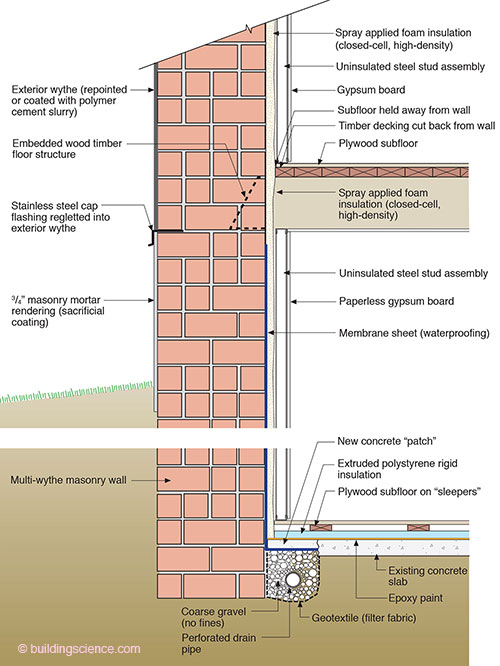 Figure 4: Basement Foundation Retrofit —This works everywhere (see “BSI-011: Capillarity–Small Sacrifices”). This will not work with air permeable insulation that is moisture sensitive. No fiberglass or cellulose below grade in this type of assembly. You can add fiberglass or cellulose to the interior of the spray foam in this assembly, but not instead of the spray foam in this assembly. Further note that we are talking the high-density closed-cell stuff.

How to do the walls and roof? Depends on where you are and what you have going on inside. Lets assume that we are dealing with residential occupancies or commercial occupancies. Not special use occupancies such as humidified pressurized hospitals, museums, indoor swimming pools, art galleries, data processing centers or other places with miserable ugly interior loads. 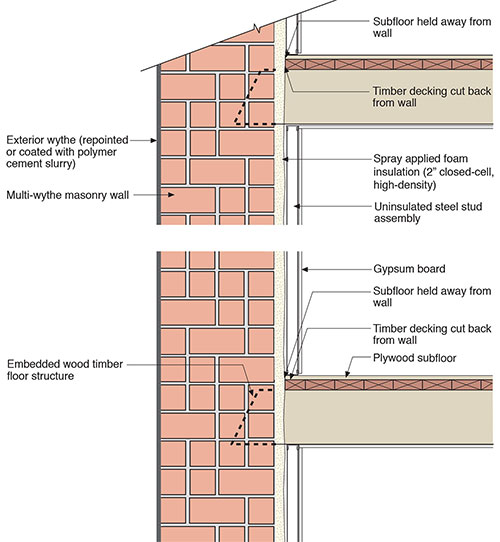 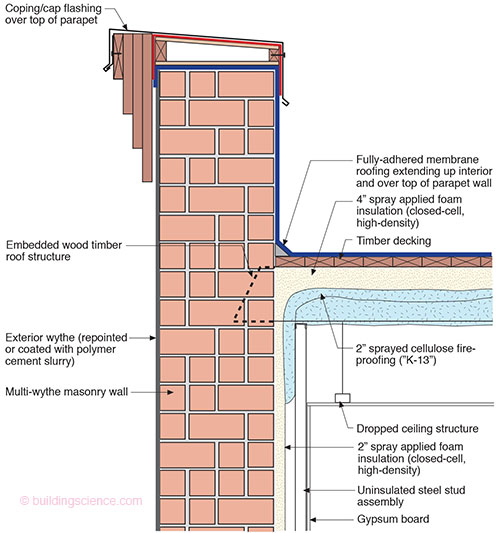 Figure 6: Roof Insulation Cold Climates – Get a look at that parapet. Drip edge and slope to the back-side. Roof membrane over the top. Secondary membrane over the top of that. Does not get better than this. The spray applied foam needs to be protected with a fire resistant layer. 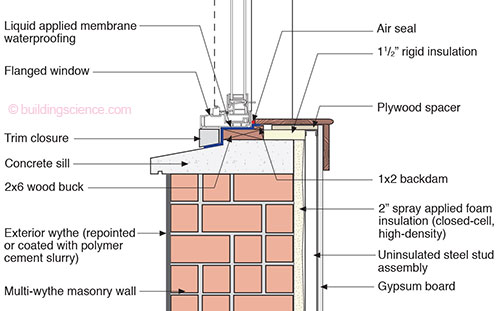 Figure 7: Window/Wall Interface Cold Climates – Note the rigid insulation lining the opening to handle the “flanking” losses. Further note the liquid applied membrane waterproofing over the sill framing creating a back dam. Don’t forget the end dams (not shown). Check out the kerf on the concrete sill.

In hot-dry, hot-humid, mixed-dry, mixed-humid and marine climates (IECC Climate Zone 4 or lower) all insulation systems work (Figure 8, Figure 9 and Figure 10). The climate zones are not cold enough to worry about air-transported moisture from the interior or vapor diffusion from the interior. The hygric buffering (love that terminology, means “storage capacity’) of the masonry helps with any moisture that may accumulate at the insulation masonry interface. Note that this assumes you are not humidifying and pressurizing the building. Do not do this with special use occupancies as they tend to be humidified and pressurized. 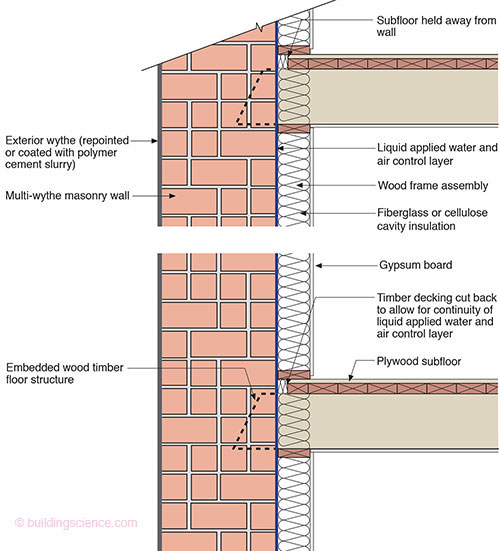 Figure 8: Wall Insulation Everywhere Else – Note the liquid applied water control and air control layer. Note that this layer is continuous between floors. Note that the subfloor and timber decking is held back or opened up to make this happen. Further note that there is no interior vapor barrier. No polyethylene. No foil faced gypsum board. No vinyl wall coverings. Do not go there. I repeat, do not go there. 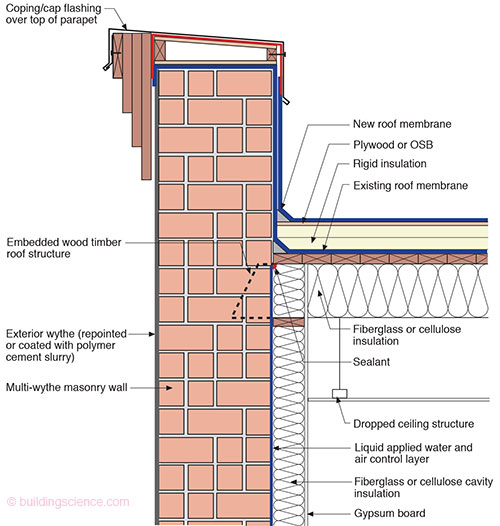 Figure 9: Roof Insulation Everywhere Else – Note the parapet. Note that in this assembly rigid insulation is installed above the roof deck to control condensation. This is also an excellent strategy in cold climates or colder. 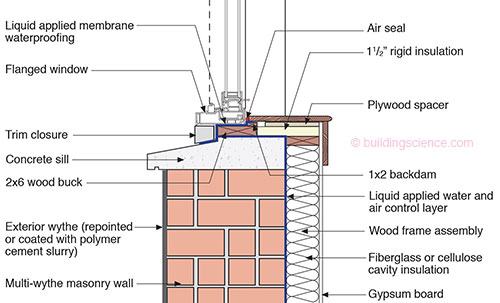 Figure 10: Window/Wall Interface Everywhere Else – The big thing to note in this detail is that the interior liquid applied water control layer and air control layer wraps into the window opening and extends under the framing tying into the liquid applied membrane waterproofing that is over the sill framing. Further note the rigid insulation lining the opening to handle the “flanking” losses.

Big thanks to Professor John Straube for the “Irish” photographs reprinted here and the education he has given me over the years on rainwater deposition. He did his doctorate on “Moisture Control in Enclosure Walls”. A good read. He can be found at the University of Waterloo when he is not chasing the four phases of water. 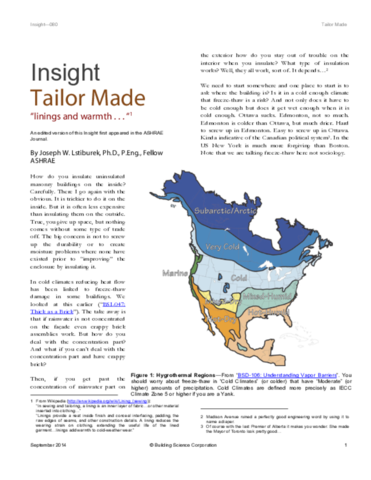