Unfortunately, what happens in Vegas, stays in Vegas, at least as far as building science is concerned, because what happens in Vegas from a building science perspective is rather good. Two of the hottest places in the world, where no one with any sense should build, are Dubai in the United Arab Emirates and Las Vegas in the United States. Who would ever have thought that Dubai could learn from Vegas?

The only reason Las Vegas exists is because of mobster Bugsy Segal, and the only reason Dubai exists is because of a pretty wise Sheik who recognizes that the oil is going to run out.1 The Dubai business plan is pretty sound,2 unfortunately, a lot of the buildings going up are not. They are not cheap, they use the best materials, the workmanship and project management are among the best anywhere, the architecture is second to none,3 and the structural engineering is state-of-the-art. So, what is missing in Dubai? Environmental control. It’s something that often seems to be ignored or if it is considered at all, it is an afterthought that is “kludged” onto the project design after the primary architecture and engineering is complete. Sound familiar?4

Dubai makes the Emerald City in the Wizard of Oz look like a slum. It is ultramodern. The scale of construction and development is staggering. The investment in infrastructure (power, water, transit, roads, bridges, communications) is unbelievable. You literally have to see it to believe it. Think of Manhattan, but new, clean, and with no graffiti. It’s what New York City would be like if the Swiss ran it.

Stucco rules Dubai, and not just Dubai. From Las Vegas to Dubai and from Phoenix to Brisbane, people who live in hot desert climates love their stucco. This makes sense historically. Because not many trees are in hot desert climates, stuff was built out of sundried bricks. Stucco renderings over bricks were a natural. In the old days, a thousand years ago, the way to build in a hot climate was pretty much figured out by wise, old Arab architects. Buildings were typically thick, mass-stuccoed walls, with heat absorbing clay tile roofs, and small window openings sheltered from direct solar exposure sited to maximize cross ventilation. Sometimes they were constructed with heat sink towers acting as thermal chimneys to enhance ventilation airflow. Air would enter down low and flow upwards and outwards out of the thermal chimneys. This was coupled with evaporative cooling from fountains located in interior courtyards that resulted in cooling interior breezes. This was impressive stuff before the advent of air conditioning, thermal insulation, and insulated, gas-filled, spectrally selective glazing in thermally efficient frames.

Well, now we have air-conditioning, thermal insulation, and insulated, gas-filled, spectrally selective glazing in thermally efficient frames available to us. Too bad, apart from the air-conditioning, we only seem to use this stuff in Vegas, but not in other places that need it such as Dubai. Where have all the wise, old Arab architects gone?

The houses in Vegas and Dubai look pretty similar with stucco everywhere (Photographs 1 and 2). But, their similarity ends with the looks. 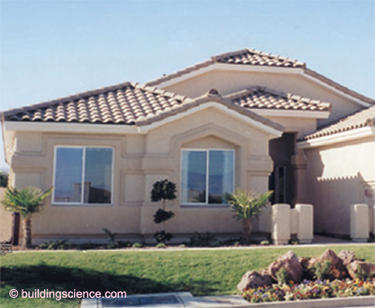 Photograph 1: Las Vegas Home—Stucco, tile roof, in a subdivision in the middle of the desert. 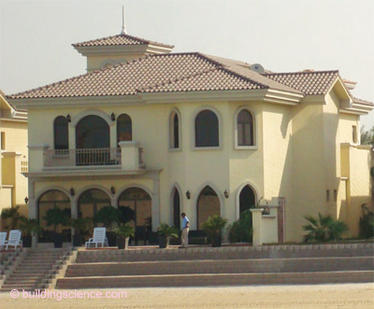 Photograph 2: Dubai Home—Stucco, tile roof, in a subdivision on a man-made sandbar in the middle of the Persian Gulf surrounded by desert.

In Vegas, residentially, we see lots of stucco installed over exterior insulation, over insulated wood frame structures (Photograph 3). In Dubai, residentially, we see lots of stucco installed over uninsulated masonry walls (Photograph 4). Roofs in Vegas are tile with light-colored membranes over insulated wood truss assemblies (Figure 1). Roofs in Dubai are tile with light-colored membranes over uninsulated concrete slabs (Figure 2). Windows in Vegas are nonconductive vinyl and wood-framed, low-E2 gas-filled glass. Windows in Dubai are conductive aluminum, single-pane tinted glass. Air conditioners in Vegas are small and efficient. Air conditioners in Dubai are huge and not efficient. Residential construction is “tight” in Vegas with controlled ventilation. Residential construction in Dubai is also “tight” but with no provision for controlled ventilation beyond that of operable windows.

Which makes more sense in an unbelievably hot climate: residential construction in Vegas or Dubai? 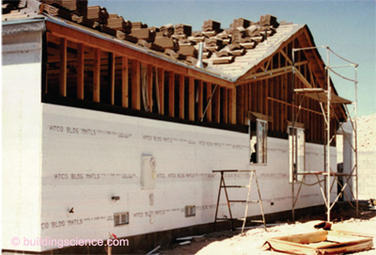 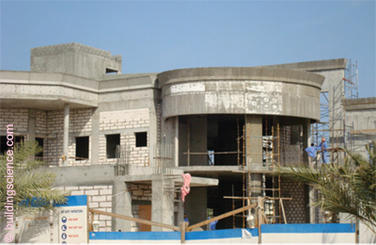 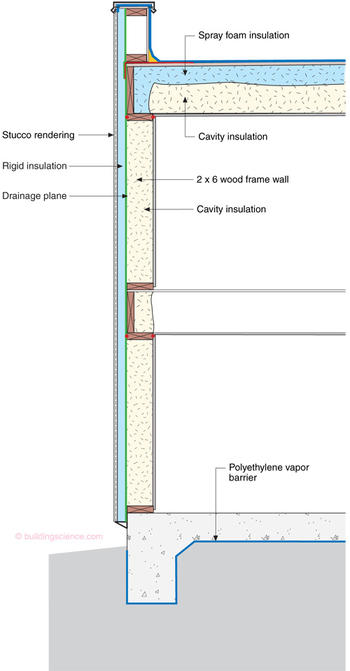 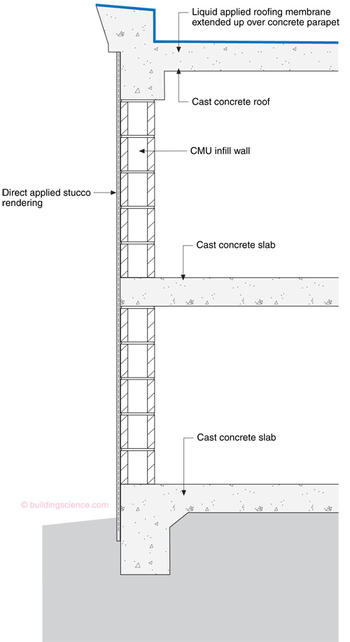 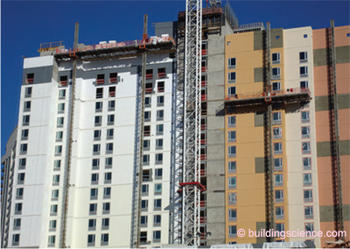 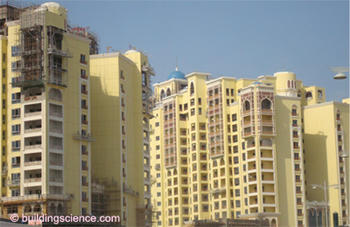 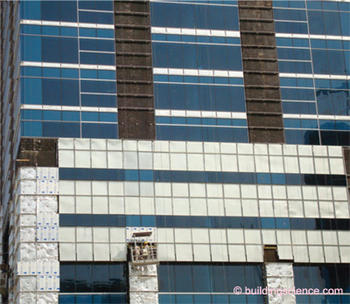 Photograph 7: Typical Dubai Curtain Wall—The curtain wall is pretty much an uninsulated cladding that is installed over a CMU backup wall that is externally insulated with foil-faced rock wool. Note that the CMU is coated with a liquid-applied dampproofing. This is a good start. However, the liquid-applied dampproofings commonly used in Dubai are too thin to do much of anything. They don’t do much for the rain control (but there is not much rain to worry about in Dubai). The key is that they are not effective air barriers as the assemblies are too air porous, and air barrier continuity is missing at punched openings (this is a big deal). This pretty useless thin stuff could easily be replaced with a “for-real” drainage plane/air barrier membrane (liquid applied) coupled with some minor detail changes at the punched openings. This change would be huge. Now, if you want to save costs, the CMU backup wall could be replaced with a steel stud wall with exterior paperless gypsum board. Think of the weight and resources saved? This configuration would actually be better than most curtain walls in Vegas, London, and New York. Oh, yeah, I almost forgot—the window area should be reduced, but you all knew that.

Which makes more sense in an unbelievably hot climate: commercial construction in Vegas or Dubai?

If you want to keep the residential solid masonry, why not insulate it? Where best to insulate it? That’s an easy answer, on the outside, of course.

The same argument could be made for commercial construction. Steel studs and non-paper-faced exterior gypsum board is cheap construction compared to solid masonry infill walls and solid masonry interior demising walls. Why not insulate the masonry walls in Dubai?

Uninsulated solid masonry walls in Dubai, both residential and commercial, scream for EIFS. But EIFS in Dubai is missing-in-action, as is most insulation.

What should they be doing in Dubai? Well, they can learn from Vegas. Even in Vegas they are not rich enough to design their buildings as if energy does not matter. In Vegas, energy is a design matter. Insulate on the exterior, reduce the glass and use unbelievably good glass for what’s left, build tight and ventilate right, control the interior loads and “lighten up.” Get rid of all that unnecessary weight. That weight is energy too.

The whole reason for Dubai’s existence is a wise Sheik planning for the future when the oil runs out. The irony is once again rich. The reason Dubai gets away with ignoring fundamental environmental control principles is the presence of almost limitless wealth due to oil. But the oil is proving not to be limitless, and neither is the wealth that is based on it. When the oil runs out Dubai will face a huge problem of its own making, affording the energy bill of this crown jewel in the modern Oz on the shores of the Persian Gulf. The reason those wise old Arab architects figured out elegant solutions to building in the desert a thousand years ago was that they did not have limitless wealth. The young Arabs today could learn from the old Arabs, as could we all. 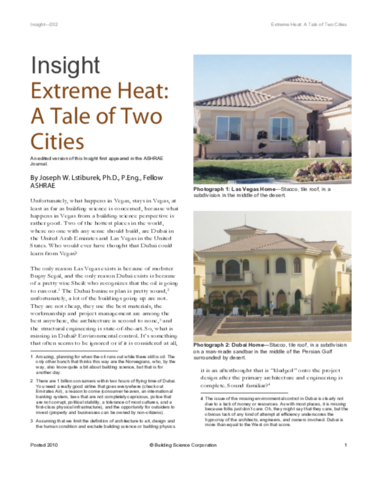