We are all guilty of bad-name-itus, but the Model Building Codes take the cake.2 They are examples of bad wording and misunderstandings. We mostly put up with the bad wording and misunderstandings in code documents because they also are the law of the land and therefore scary. In one chapter alone of the International Residential Code the same enclosure element is called three different things—none of which are defined. Why this occurs particularly in the Model Building Codes should be no surprise if you understand how they are made, modified and adopted. The fact that the Codes work as well as they do is due more to the good will of the Code Officials3 than the brilliance of their terminology.

I am going to attempt to do something completely arbitrary, unilateral, annoying to others and otherwise typical for me because we have to start somewhere to clear up the mess. I am going to take a run at this language thing and try to get everyone to agree. Each one of the terms we typically use or should use needs to be not just defined but defined with a performance metric. This is not easy, but necessary. Here goes. 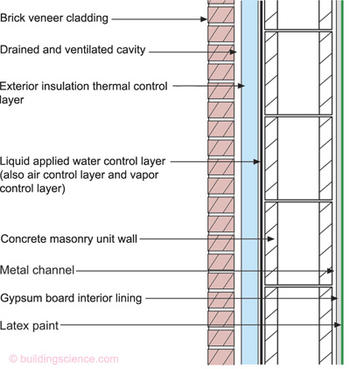 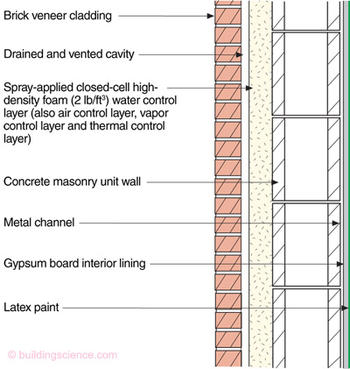 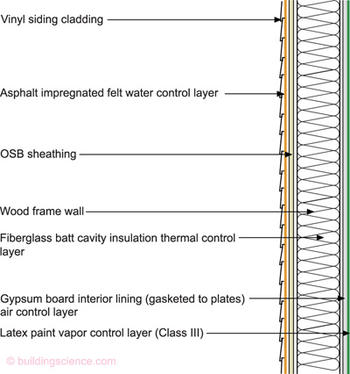 Stop with this water resistive barrier, weather resistive barrier, house wrap, building wrap and building paper stuff. Enough already. What is this layer supposed to do? Control the water. It is a water control layer. End of story. Where did this weather stuff come from anyway? What part of the weather are we resisting? And we don’t need the word “resistive”—it serves no purpose except to make sentences longer. And spare me the “wrap” thing. What are we doing? Wrapping presents? And stop with the paper stuff—the layer is not always paper.

The air control layer is a pretty easy one to deal with—most of us get the concept. The hard part is defining it and getting agreement on the definition. We are close. It would be real easy if everyone would just let me be in charge. OK, so the world does not work that way. Here is my stab at it. Air control layers are materials or assemblies of materials that control airflow between a conditioned space and an unconditioned space or between units in multi-family and apartment construction. Done. We can also clear up the confusion surrounding an additional term right now. An air-impermeable material can be used as an air control layer. Whew. We can continue to argue about the metrics of the materials, assemblies and enclosures, but at least the terms are going to be used correctly.

The vapor control layer thing is the hard one to get straight. And I have been all over the map on this one over the course of my career. But I think I finally have it right. A vapor control layer is the component (or components) that is (or are) designed and installed in an assembly to control the movement of water by vapor diffusion. One of the reasons it is complicated is that in many cases we do not want (or need) a complete barrier—we merely want to slow the rate down—and—even more complicated we sometimes we want to let things out in the opposite direction. That is where the term “control” comes into play. There are different degrees of “control.” We refer to the different degrees as “classes.” A vapor control layer class is a measure of a material or assembly’s ability to limit the amount of water that passes through the material or assembly by vapor diffusion.

There are presently three “classes” of vapor control layer defined in the Model Building Codes. Unfortunately, the term used in the Model Building Codes is “vapor retarder class,” rather than vapor control layer class, but the codes do have the metrics right—after many years of “deliberation”—and “deliberation” is the polite way of describing the process.

The last annoying one is thermal control layer. The Model Codes currently use “building thermal envelope” in the part of one chapter and then promptly use thermal barrier in another part of the same chapter followed by something called a “thermal boundary.” Let’s be consistent shall we? Pick one— pick thermal control layer and be done. You already know how I feel about “envelope.” I am less annoyed with “boundary,” but let’s stick with one term. So what is a thermal control layer? Easy. The component (or components) that is (or are) designed and installed in an assembly to control the transfer of thermal energy (heat).

OK, I feel much better now. My bartender said that I had to deal with my “issues” openly. Only one issue left—there is no rational numerical performance metric for a water control layer. Talking about the resistance to 25 inches of standing water is obviously madness (yes some products are rated this way), as housewrap products rated this way leak when they are installed on a wall with staples. Roofs actually do resist standing water but don’t have a rating. I am punting on this one and asking for input. Email me your thoughts on this (joe@buildingscience.com). Do we go the way of the window industry? Or is there a better other way? I promise to write about this later based on what I get. If I don’t get anything I will make stuff up6—it has been known to work for me before.

Air control layer systems typically are assembled from materials (such as gypsum board, sealant, etc.) incorporated in assemblies (such as walls, roofs, etc.) that are interconnected to create enclosures. Each of these three elements has measurable resistance to airflow. The maximum air permeances for the three components are listed as follows:

An air-permeable material has an air permeance greater than 0.02 l/s-m2 at 75 Pa pressure differential when tested according to ASTM E 2178 or E 283.

The part of the building that is designed to be thermally conditioned for the comfort of occupants or for other occupancies or for other reasons.

Air in a conditioned space.

Air outside the building.

The component (or components) that is (or are) designed and installed in an assembly to control the transfer of thermal energy (heat). Typically these are comprised of insulation products, radiant barriers, or trapped gaps filled with air or other gases. One quantitative measure of a thermal control layers resistance to heat flow is the R-value. R-values are limited in that they deal with conduction, one of three modes of heat flow (the other two being convection and radiation) and that their range of applicability is typically limited to materials not assemblies.

The component (or components) that is (or are) designed and installed in an assembly to control the movement of water by vapor diffusion.

The measure of a material or assembly’s ability to limit the amount of water that passes through the material or assembly by vapor diffusion. The test procedure for determining vapor control layer class is ASTM E-96 Test Method A (the desiccant or dry cup method).

Class II:     Materials that have a permeance of 1.0 perm or less and greater than 0.1 perm

Class III:    Materials that have a permeance of 10 perms or less and greater than 1.0 perm

A sheet, spray or trowel-applied membrane or material layer that controls the passage of liquid water even after long or continuous exposure to moisture. (OK readers, gadflies and other building science crazies, I need a performance metric or series of performance metrics. Do we go down the route of the window industry? Or do we go somewhere else? Email me with your thoughts—seriously—lets get this one figured out before the next decade is out: joe@buildingscience.com.) 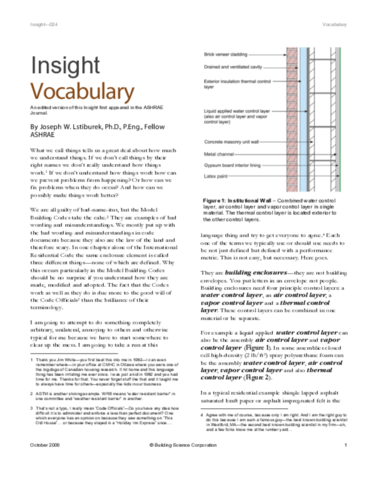