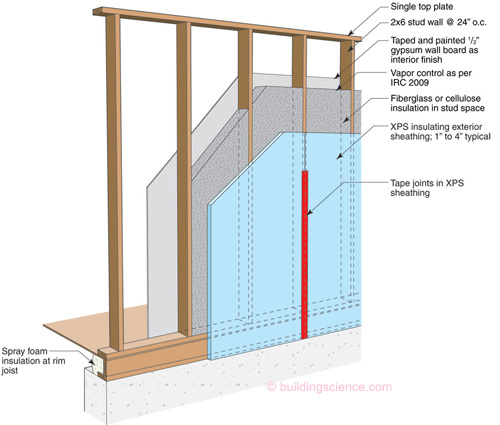 Scoring: How It Rates

This Information Sheet summarizes advanced frame wall construction including the advantages and disadvantages of this construction strategy. A more detailed analysis and direct comparison to several other walls can be found online.1 The scoring system is subjective based on the relative performance and specifications between different wall systems. Complex two dimensional heat flow analysis and one dimensional hygrothermal modeling were used to determine moisture related durability risks for analysis.

For a more complete analysis of this and other wall constructions, go to www.buildingscience.com/doctypes/information-sheets.

Whole-wall R-value: Two-dimensional heat flow analysis with thermal bridging effects and average framing factors (16%) shows increases to the R-value of the assembly and improvements to the efficiency of the fiberglass batt in the stud space by decreasing the thermal bridging effects. Advanced framing walls with 1” and 4” of XPS insulated sheathing have whole wall R-values of R-20 and R-34 respectively.1

Air Leakage Control: Fiberglass, blown and sprayed cellulose are air permeable materials used in the stud space of the wall allowing possible air paths between the interior and exterior as well as convective looping in the insulation. Densepack cellulose has less air permeance but does not control air leakage. Insulating sheathing (EPS, XPS and foil-faced polyisocyanurate board foam) products are air impermeable. When joints between panels of insulation and the insulation and framing are properly sealed with tape, mastic, caulk, etc., an effective air barrier system can be created at the exterior sheathing.

Rain Control: Rain leakage into the enclosure is the leading cause of premature building enclosure failure. Rain control is typically addressed using a shingle lapped and/or taped drainage plane such as building paper or a synthetic WRB (i.e. homewrap). It is possible to use insulated sheathing as the drainage plane if all the intersections, windows, doors and other penetrations are connected to the surface of the insulated sheathing in a watertight manner, and the seams of the insulation are taped or flashed to avoid water penetration2.

Insulated sheathing reduces the risk of wintertime condensation by increasing the temperature of the condensation plane, and reduces the risk of summer time inward vapor drives by slowing the vapor movement into the enclosure from storage claddings such as masonry or stucco. The level of vapor control in insulated sheathing walls is determined in the IRC and should be consulted as installing the incorrect vapor control layer or installing the vapor control layer in the incorrect location can lead to building enclosure failure.5

Drying: Insulating sheathing limits the drying to the exterior, and the wall must be able to dry to the interior. Poly vapor barriers are typically avoided so that this drying can occur. The minimum level of vapor control on the interior surface is determined by the IRC. Installing a vapor barrier on both sides of the enclosure will seal any moisture into the stud space, resulting in low drying potential, and possibly resulting in moisture-related durability risks. Ventilation behind vapor impermeable claddings and interior components (e.g. kitchen cabinets) can encourage drying.

Durability Summary: The primary durability risks associated with these wall assemblies involve moisture damage related to rain water penetration. Condensation (most likely the result of air leakage, but also potentially the result of vapor diffusion) is decreased with insulated sheathing but may still occur, although the insulating sheathing is less susceptible to moisture related risks than structural OSB sheathing.

Cladding can be easily attached to the studs directly through 1” of insulated sheathing. Thicker levels of insulation (>2”) require strapping anchored to the framing with long fasteners. Some cladding manufacturers allow their cladding to be fastened to the strapping directly.

If advanced framing is applied correctly (single top plates, correctly sized headers, two stud corners, etc.) the redundant wood framing from standard construction is removed, and the amount of framing will decrease. Using insulated sheathing instead of structural wood sheathing may require using structural panels or bracing in some locations.

Advanced framing with insulating sheathing is a logical choice as the minimum level of construction in most climates considering the more demanding insulation levels required for new construction in many climates. Using insulated sheathing can decrease the potential for both wintertime condensation, and summer inward vapor drives, and help mitigate issues caused by poor construction practices. 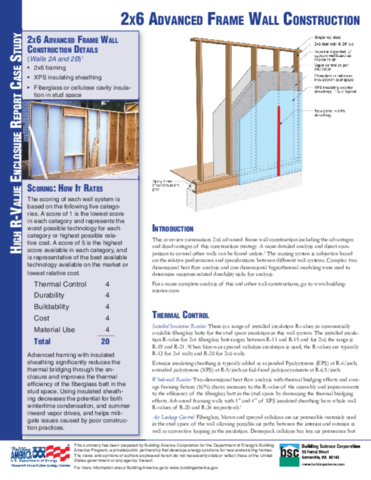