Ice rinks and arenas are a common building type in many communities. The trend over the last 25 years has been to operate these arenas for greater periods of the year, often throughout the summer. Also, an increasing number of such buildings are being built in areas with warm, humid summer weather. The result has been an increase in the number of reported moisture problems, most of which revolve around summer condensation. This digest will describe the causes and discuss potential retrofit solutions for summer condensation in ice arenas.

The most common type of ice arena uses a number of large full-span frames of steel or glulam wood with purlins that span from frame to frame supporting the exterior metal cladding and low-slope metal roofing. In many cases the buildings are simple in plan and pre-manufactured metal buildings. The building enclosure usually comprises, from the inside, a heavy plastic liner, a layer of low-density fiberglass insulation, and metal roofing/cladding. 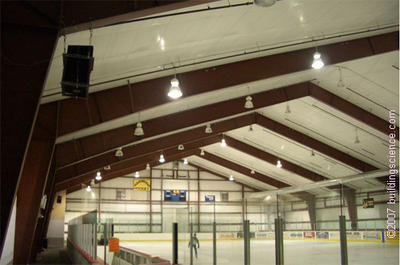 Problems are usually first reported in the late spring and early summer. Water drips from the ceiling and the drips are usually most numerous over the ice, where the drips freeze, building up bumps and stalagmites. Depending on the type of roof, the water may collect at the perimeter of the building, or at purlins, around roof penetrations, or at other discontinuities in the plastic liner.

The cause of the dripping is the accumulation of condensation on the interior plastic liner. Outdoor air leaking into the roof assembly through the many unintentional gaps in the enclosure (primarily at the eave, and gables, but sometimes through lap seams in the roofing, at penetrations, ridge, etc). The interior plastic liner is almost always a very vapor impermeable PVC or polyethylene (occasionally aluminum foil). This liner is held at a low temperature (in the range of 30 to 45 F) both by the cool interior temperatures and by radiation of the liner to the ice surface. If the outdoor air that leaks into the air permeable insulation has a dewpoint temperature higher than the liner temperature, condensation can occur. 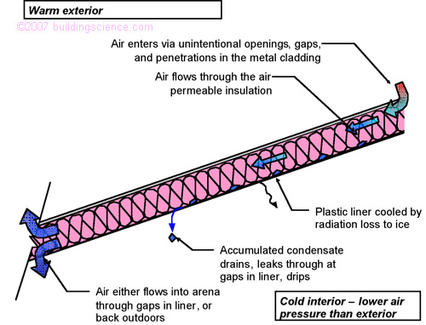 Figure 2: Mechanism of condensation and dripping

If the exterior air can leak into the roof space and is pulled into this space by negative pressures, then condensation will occur. The rate of condensation (the amount of water) will depend on the air leakiness, the size of the driving air pressures, and the difference between the dewpoint temperature of the outdoor air and the liner temperature.

In the investigation of one arena, it was found that about half of the pressure drop imposed by a blower door occurred across the metal cladding and half across the plastic liner. In other cases, more of the pressure drop occurs across the plastic liner as this is often detailed as the air barrier. Even if this layer does act to completely prevent airflow across the assembly, airflow from the exterior into the roof and back out will still cause summer condensation problems. Only in the rare cases of a very airtight exterior metal cladding acting as a true air barrier will summer condensation not occur (this is both uncommon and very difficult to achieve in practice without using spray foam or equivalent on the interior of the metal). 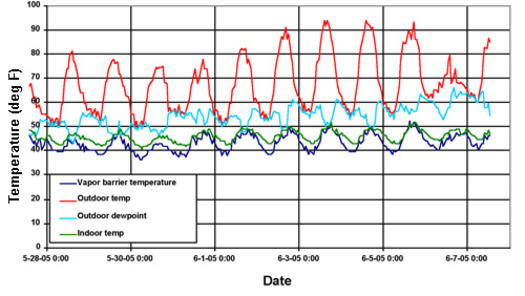 The pressures that drive airflow through the building enclosure can be due to wind pressures, mechanical equipment, or stack effect.  Wind pressures are highly variable and generally relatively low in magnitude (2-20 Pa). Because the pressures change direction with wind direction and the windspeeds in summer tend to be lower than winter, the influence on air leakage in this case is believed to be small.

Mechanical equipment (i.e., fans) can cause either a negative or positive pressure depending on whether they exhaust or supply air to the arena. The pressures act as long as the equipment operates.

Large exhaust fans are also sometimes installed to remove the gas from ice surfacing machines and/or if a significant number of people are in the arena. Such fans can produce significant negative pressures that draw warm moist air in when they operate.

Many modern arenas control the interior humidity with specialized HVAC equipment. Regardless of how dry the air in the arena, condensation will continue to occur. However, such equipment sometimes does not have balanced supply and return air flows: this can generate either negative or positive pressures. If the exhaust flow is greater than the supply flow, the equipment is creating negative pressures, and exacerbating the problem.

Stack effect, the result of hot air rising or cold air falling, depends on the size of the temperature difference between inside and outside. For the arena, stack pressures will cause air to be drawn inward at the roof during warm weather. It has been calculated that the pressure due to stack effect will often be in the order of 10 Pa during much of the summer.

There are a number of possible strategies to solve the problem of summer condensation in arenas.

In most cases the first step should be a confirmation that condensation occurs when the exterior dewpoint temperature is above the measured surface temperature of the interior vapor barrier. This can usually be done cheaply and simply by measurements with a hand held infra-red thermometer. A pair of datalogging temperature and humidity devices (such as a Hobo® from Onset DataCorp), can be used to provide hourly data. The temperature of the vapor barrier liner must be measured over the center of the ice (where it will be the coldest). It should also be confirmed that the interior temperature and humidity are within specs (and that the humidity is kept low enough).

The second step should be a review of the mechanical systems to ensure that they are not depressurizing the building. Ideally, an arena is operated with a small positive pressure (up to 5 Pa) at the neutral pressure plane.

Expensive or disruptive modifications to the mechanical equipment should be considered only after careful air-sealing has been undertaken. Gables, eaves, and building to foundation interfaces should first be tightened along with any major penetrations, but based on inspection, smoke pencil testing, or infra-red photographs other areas may require consideration. In many cases one should be able to cut the airflow into the metal roof by a significant amount using spray foam at the worst locations. The arena should then be blower door tested for air leakage again after air sealing to quantify the remaining leakage.

If a major reduction in air leakage has been achieved, the next step in remediation is to control the air pressures acting across the enclosure. The dehumidification/cooling equipment can often be used to generate a net positive pressure, thereby reducing the amount if air that leaks into the enclosure. This can help solve condensation problems at the cost of forcing conditioned air out. If the building is reasonably airtight, simple modifications may be sufficient and cost little in the way of energy.

Ideally, a control strategy would supply air during all warm weather hours (e.g. seasonally), or, to save operational energy, just during times when the outdoor dewpoint temperature exceeds a certain value. The supply air would also be activated when the CO2 or CO sensor indicates the need for ventilation. If the arena has been air-tightened sufficiently, then a moderate volume of supply air will pressurize the arena to more than 5 Pa. This pressurization approach will ensure that any air leakage that does occur will be outward for most of the time. Since the interior dewpoint temperature is well below the liner temperature, condensation will not occur from indoor air entering the insulated cavity. (Note: 5 Pa pressurization may not always stop all inward flow. Small amounts of inward air flow may still occur for short periods of time due to high wind speeds and/or extreme temperature differences, but the condensation that forms might subsequently dry out before sufficient accumulation occurs to cause dripping.)

During cold weather an exhaust fan would be operated while the supply air is disabled. This will ensure that cold weather condensation does not occur. Although sophisticated controls could be used to operate this switch over, a simpler manual switch operated once in spring and once in fall is sometimes practical.

If the pressurization available from the HVAC system is not sufficient to solve the condensation problems, the next strategy to investigate is to allow more air to flow directly into the roof-space. This can often be accomplished by cutting a few small (perhaps 4” diameter) holes in the plastic liner one or two spots per bay. This would have the effect of increasing airflow into the roof (which will lower the pressure across the enclosure) but will ensure a greater amount of dry air in the fiberglass-filled roofspace. If the airtightening step is reasonably successful, the overall air leakage rate of the arena will not change much, but the pressure drop will occur almost completely across the metal cladding, not across the combination of the cladding and plastic liner. The seasonal pressurization control strategy would remain the same as described previously.

In many cases the steps described earlier will reduce the problem to manageable levels, or even eliminate it. If not, the holes in the liner provided in the last step can be sealed and the roof space pressurized directly with indoor air using small fans. Based on some experience a fan of 50 to 100 cfm/bay may be sufficient to generate a 10 to 15 Pa pressure difference.

This should ensure that no outdoor air leaks into the roof space, and that the space is filled with the relatively dry air of the arena interior. This system would create a constant air loss but the energy penalty is often small if the airtightening has been successfully implemented. This solution trades off a small increase in operational costs for a very low repair cost. The seasonal pressurization control strategy would remain the same.

Figure 5: Pressurize the roofspace directly with the aid of several small fans

In new construction, vapor impermeable linings inside of the insulating layer should not be used in ice arenas that are expected to operate during warm weather. Needle punched linings, or vapor permeable sheets should be used in conjunction with slight pressurization. However, to deal with the serious thermal bridging problems of most metal building systems, exterior insulated sheathing must be used between the metal roof cladding and the structural components.

Best practice would be to use the metal over a roof underlayment (installed shingle fashion to act as a drainage plane) with sealed joints (to act as an air barrier) over 2 layers rigid insulation (typically a minimum of 4” of polyisocyanurate insulation) over taped housewrap on plywood or gypsum sheathing, and metal deck spanning between purlins. Alternatively, a single thinner layer of rigid insulation can be used over purlins with roll insulation and a vapor permeable lining. 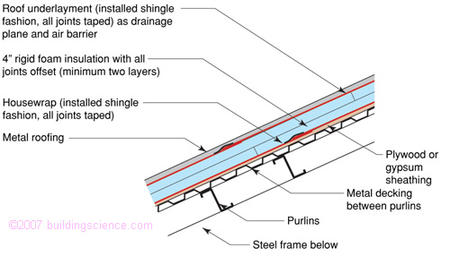 This digest has discussed moisture performance problems, usually manifested by dripping from the ceiling, when metal building systems are used as ice arenas. The problems are usually caused by exterior air leaking into the roof space filled with air and vapor permeable insulation and then condensing on a vapor impermeable lining cooled to well below the interior air temperature by infra-red radiation to the ice surface. Retrofit solutions involve air sealing the exterior metal and controlling the interior pressure so that air leaks from the interior to the exterior instead of from the outside to the inside.

In new construction of ice rinks and arenas that will be operated in warm weather, metal building system enclosures should be designed with a layer of foam between the metal cladding and the structural framing, an effective air barrier and drainage plane outside most of the insulation, and a vapor permeable interior lining. The HVAC system should be designed and commissioned to slightly pressurize the arena and control the interior humidity. 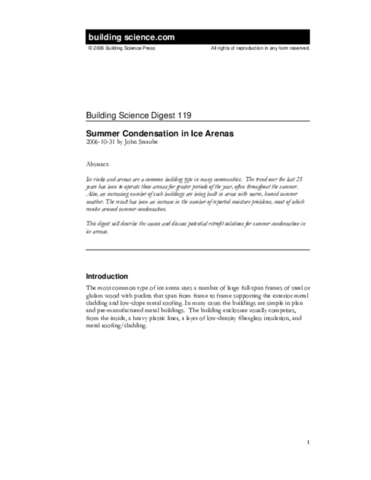