Surface tension can cause all kinds of problems in buildings. Rainwater can flow around a surface as a result of surface tension (Figure 1).  The traditional way of dealing with surface tension is to “break” the surface tension with a “kerf” and create a “drip” or to provide…yes you guessed it…a “drip edge”. Photograph 1 is a spectacular image of doing it right. Look at the beautiful sloping stone sill…sloping from the back…and from the ends…and look at the front edge. It gets even better…look at the kerf under the sill (Photograph 2). This is in Washington, DC. Yup, we knew how to do things a hundred years ago. Photograph 1: Stone Sill - Beautiful sloping stone sill…sloping from the back…and from the ends…and look at the front edge drip. Photograph 2: Kerf - Kerf cut into the underside of the stone sill in Washington, DC a hundred years ago.

And then a decade or two goes by…and we forget (Photograph 3 and Photograph 4)….no kerf…no drip... The good news is that it can get fixed easily…and was with a Skilsaw and a diamond blade (Photograph 5)…kerf added…yeah!  Even better, the kerf is invisible. Historic folks can take a deep breath2… Photograph 5: Retrofitted Kerf – A kerf can easily be retrofitted with a Skilsaw and a diamond blade. Even better, the kerf is invisible.

Let’s go back 200 years….the Notre-Dame Basilica in Montreal (Photograph 6). Look closely at the horizontal “bands”….they were supposed to act as “drip edges”…but didn’t the first time out…so they got retrofitted with lead coated copper drips (Photograph 7). Photograph 6:  Notre-Dame Basilica in Montreal - Look closely at the horizontal “bands”….they were supposed to act as “drip edges”… Don’t want to irritate the Quebecois too much…we Anglos got it wrong in Toronto in our Legislature Assembly a hundred years later and had to add drip edges (Photograph 8). Pretty sure a Quebecois sorted it out. We messed up the Canada Life Building in Toronto during the depression years…but fixed as well with retrofitted drip edges (Photograph 9). Photograph 9: Canada Life Building in Toronto - We messed up the building during the depression years…but fixed it with retrofitted drip edges.

When we start retrofitting old wonderful mass buildings on the interior with insulation we significantly reduce energy flow and increase the risk of freeze-thaw damage in cold climates with lots of rain….more than 20 inches of annual rainfall (Figure 2). Can we insulate and not destroy the buildings? Yes, if the rainwater is not concentrated and drips away….yeah!!! As much as I want to pick on folks from Montreal because the Habs keep beating my Leafs they have got it “sorted”3. Look at the retrofitted drip edges that are going hand-in-hand with the energy efficient window replacement and interior insulation (Photograph 10). And guess what? It has caught on in New Zealand (Photograph 11) and in Czechia (Photograph 12). Photograph 10:  Montreal Retrofits - Look at the retrofitted drip edges that are going hand-in-hand with the energy efficient window replacement and interior insulation. Photograph 11:  New Zealand Retrofit Drip Edges – Wellington, New Zealand…they drive on the wrong side of the road…but they do know buildings… Roof edges are a big deal. We have been retrofitting “reversible” parapet coping drips (Figure 3 and Photograph 13). Historic folks like the term “reversible” because they can “undo” whatever is done later. Of course, they shouldn’t because the “intervention” saves the building. The discussion often gets quite animated…we will leave it for later…with the understanding that “saving the building” is more important than “preserving a dumb detail”… Figure 3:  Parapet Coping Cap  - Retrofitted “reversible” parapet coping cap with drip edges. Reversible means you can take it off and restore the “original” detail…even if it makes no sense to do so…except to make a historic statement…. Speaking of dumb details check out Photograph 14.  Wow, dumping the roof rainwater runoff right on the wall. Ouch. Good news….got fixed…elegant fix that is pretty much invisible. A “minor” “kick out” with a “major” impact…a short diagonal metal roofing “ridge” directing water away from the roof/wall interface (Photograph 15). Photograph 14:  Bad Detail - Dumping the roof rainwater runoff right on the wall is a bad idea. Photograph 15: Bad Detail Repaired - Elegant fix that is pretty much invisible. A “minor” “kick out” with a “major” impact…a short diagonal metal roofing “ridge” directing water away from the roof/wall interface.

The entire point of all this is that we can do seemingly minor changes from an aesthetic perspective but have major impacts on the flow of rainwater on building surfaces reducing the concentration of rainwater and thereby reducing the amount of rainwater absorbed by materials. If we do this we can safely insulate old buildings and not damage them from freeze-thaw. Even if we don’t insulate old buildings we can save them from water damage. If we do this right…no one will know we were even there….

1Not “big time” absorption.  Minor absorption pretty much happens all the time.  When we get too much of it…in excess of the critical degree of saturation we can get freeze thaw damage….we were here before:  “BSI-047: Thick as a Brick”, Building Science Insights, May 2011.

2Despite being virtually invisible I sometimes get arguments from historic consultants for something this innocuous.  You should see their reactions with the other stuff that we need to do to save old buildings…stuff that is not invisible…even though it is not noticeable to anyone except professionals…sheesh…

3“Sorted” is a wonderful New Zealand term…meaning sorted out…. 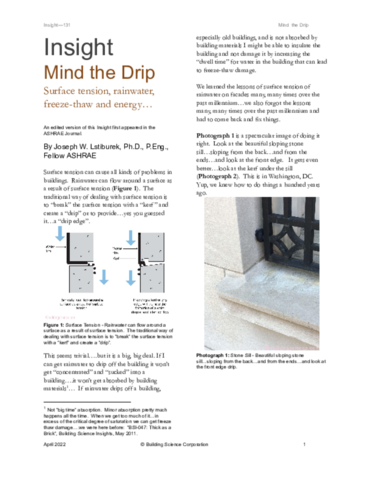